A fond and more personal reminder of Ammy, for those who know her well enough to not need a poster-type of picture to remember her by.

To continue this series of themed fanart blog posts, let’s imagine how those who had “actually witnessed” Ammy might want to remember her.

The kind of painting, drawing or sketch best understood by its owner; almost like a fond portrait of a family member, or admired and understood hero.

The following artworks show Ammy with crimson markings on her fur and Divine Instruments above her back – only seen by those who truly believe in the gods. Some artworks may show Ammy being cheerful (perhaps because of her enjoyment for nature and life) or show her concerned (over the struggles ahead), other artworks may show Ammy glowing with divine power or judging and repelling darkness.

However, these fan artworks will all show a deity (god or goddess) who is not inaccessible to those who wish to be a part; a deity happy to walk (incarnated as a wolf) alongside the everyday people in Ōkami’s story, and assist them with their earthly, mundane struggles. 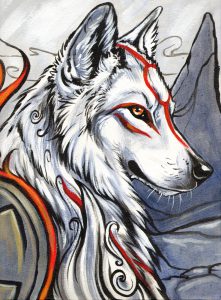 Click on a picture to see it pop up in a “lightbox”. All fanarts shown are my personal favourites. (Featured art: Of the Sun – by BrushAndTea)

There’s a lot to like about this painting, from Ammy’s generally quiet but powerful presence, to the folds of neck-fur that appeared from turning her head, to the slight but confident smile, to the beautiful living eyes and the cute and functional ear-fluff to help prevent frostbite and keep out any grass seeds while still looking cute as well… But my favourite of course, are the sunlit glowing whiskers!

This artist sure knows how to draw cute whiskers. 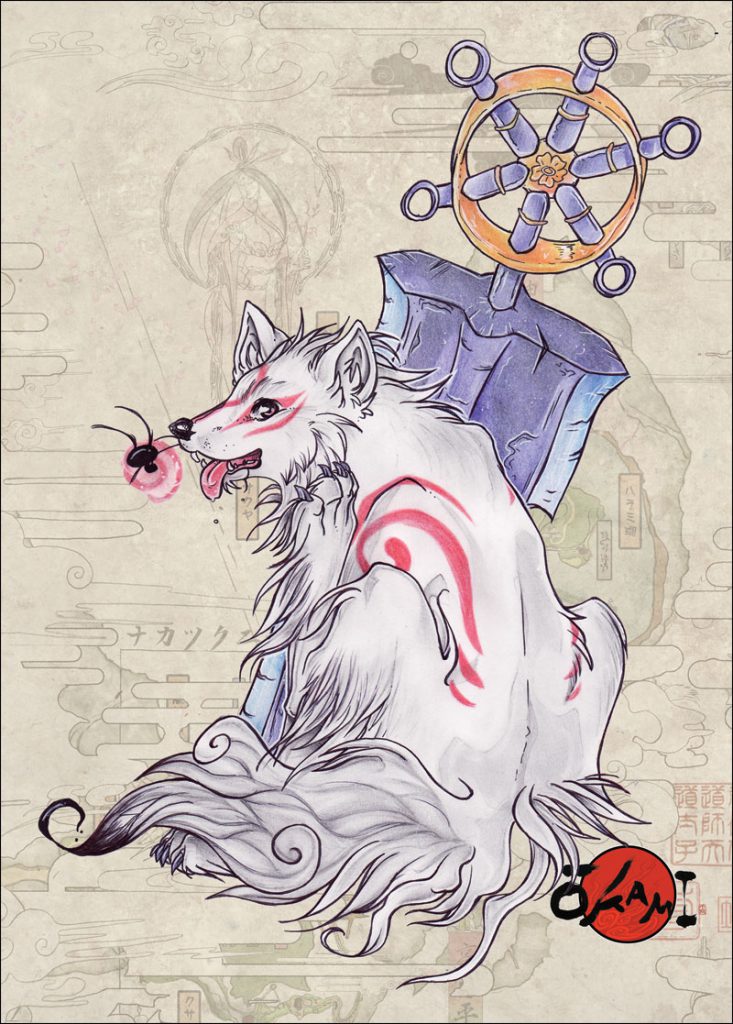 Speaking of cute… Ammy looks so cuddly and fluffy in this drawing.

I had a doggy once when I was a kid who used to love scratching herself like that, and would look back at me all cheerful. Funnily enough, her nickname was “Mrs. Muscle”, because of how powerful and strong she was (even as a puppy), but was the friendliest and gentlest “kitten” one could imagine. This fanart reminds me a lot of her.
Whoever made this artwork, probably also had a doggy who would merrily scratch herself.

That incredibly massive and powerful battered Glaive in the background is an interesting contrast. First Ammy slays a few demons, maybe a demonic 8‑headed hydra or two, then she sticks her 2000 kilogram Glaive in the ground and has a cheerful scratch.
I’m not sure Issun (her little Poncle friend) approves of the (un)intended side-effect of being dislodged from her copious neck-fluff, though.

By the way, I suppose “sword”, “longsword” or “greatsword” would be a more accurate way to describe such weapons because they aren’t attached to a long pole, which would signify them as a “pole weapon” such as glaives.

However, instead of a pole used to wield the blade, I suppose Ammy uses her divine powers, much like she uses these powers to control the “Divine Instrument” Reflectors and Rosary Beads.
The pole on a normal glaive, provides the blade with much further reach – and so does Ammy’s divine power when wielding these weapons.

That’s probably why they’re called Glaives in Ōkami – they’re not supposed to be wielded by their handles like swords, but by a divine power, like an “invisible” pole.

Early in the design-phase, arms growing from Ammy’s back were considered. I’m glad that never went ahead – would have been a bit creepy. 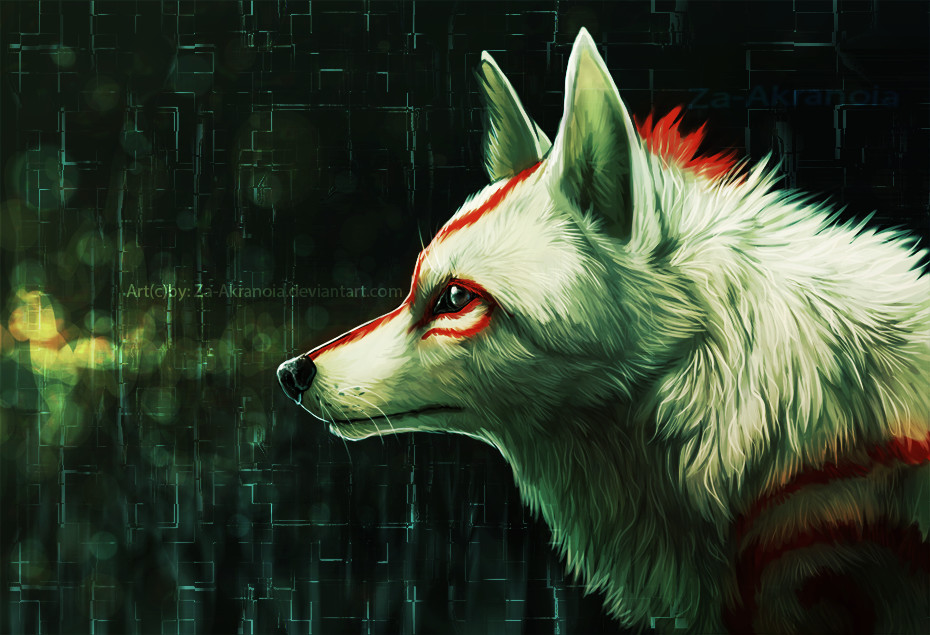 Lovely lighting in this scene, and an expression of duty and the willingness to carry it out. The painting reminds me of another dog I once had in my life: she was a Shipperke – very feisty, tough and grew up very quickly, almost like she was never a puppy.

She was born without a tail though, so she wiggled (thrashed about) the whole back half of her body to express her positive feelings towards her family.

Had Ammy been reincarnated without her tail (which doubles as her Celestial Brush – the instrument used to apply divine powers/miracles), and had my Shipperke’s resourcefulness, then Ammy would have simply carried a brush holder around. In fact, carrying a brush holder was seriously considered by Ōkami’s development team, before they settled on Ammy using her tail as a brush, due to the awkwardness of using a brush holder. 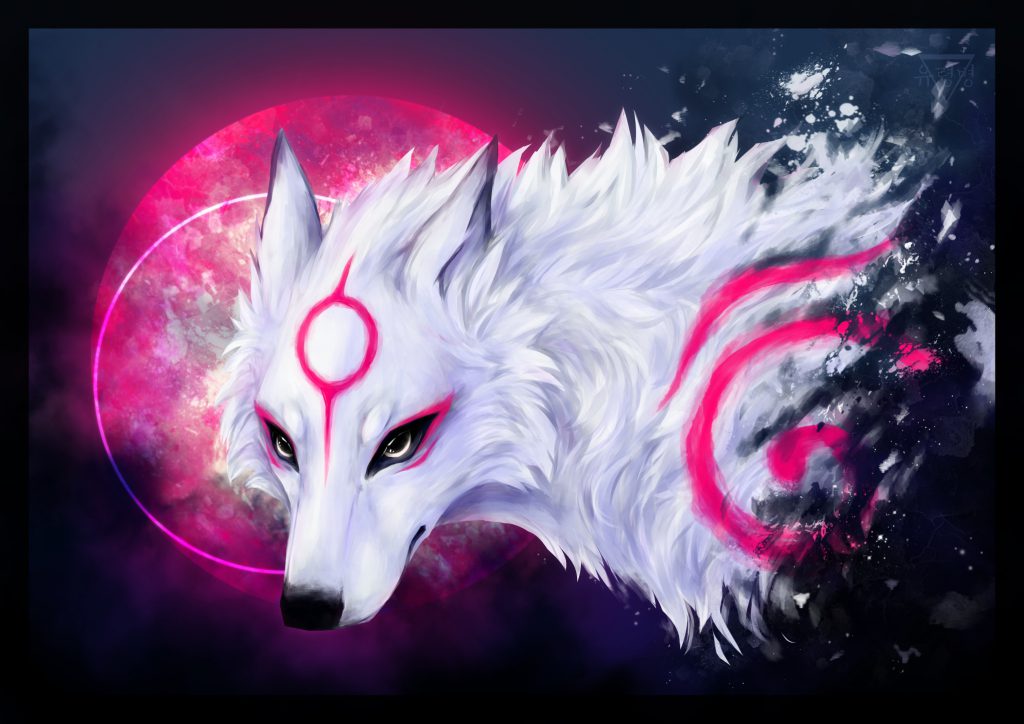 Quite a more “feral wolf” look in this painting; the kind of goddess in wolf-form that won’t treat demons with silk gloves.

This blog post playfully considers the kinds of drawings and paintings that people who had “actually seen” Ammy would create. Therefore, one can assume that the “eyewitness” artist of this painting didn’t see a dog/pet/best friend, but rather a powerful goddess and saviour, of a struggling world…

A saviour ferocious enough to even bite and tear at demons when necessary. Ammy’s “(brush) ink” can run out, and she’ll lose the ability to wield Divine Instruments against her enemies, so she’ll bite, slash and kick them instead. That’s pretty hardcore. 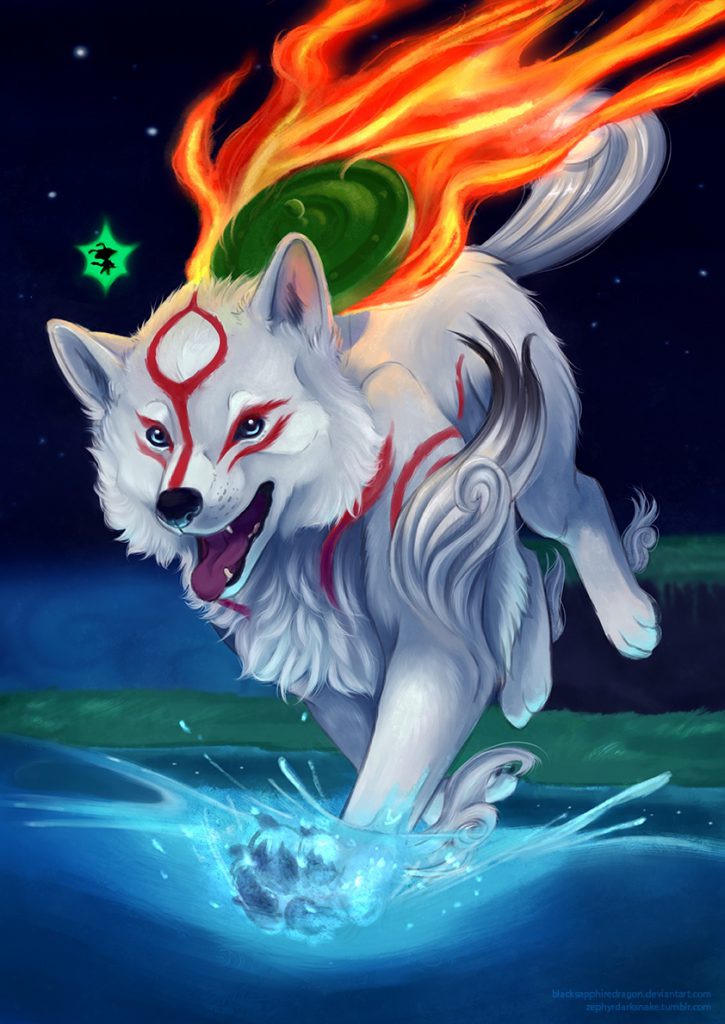 And here we are, back at a painting made with a more playful and approachable fondness. Ammy lit up by the moon and the starlight, but also by the Divine Instrument on her back, and Issun with her on the journey (and bouncing on her head).
A youthful confidence on her face, perhaps this being early on in Ammy’s journey when her memories after her one hundred year slumber (*) were still a little fuzzy, but the adventure ahead crystal clear.
Definitely a painting created by a younger “eyewitness” artist.

* Ammy was “sleeping” for one hundred years as a statue, before being awakened again to once again fight demons.
The statue was made of a wolf called Shiranui – the name given to Ammy by the then residents of Kamiki Village, whose lives she had saved. 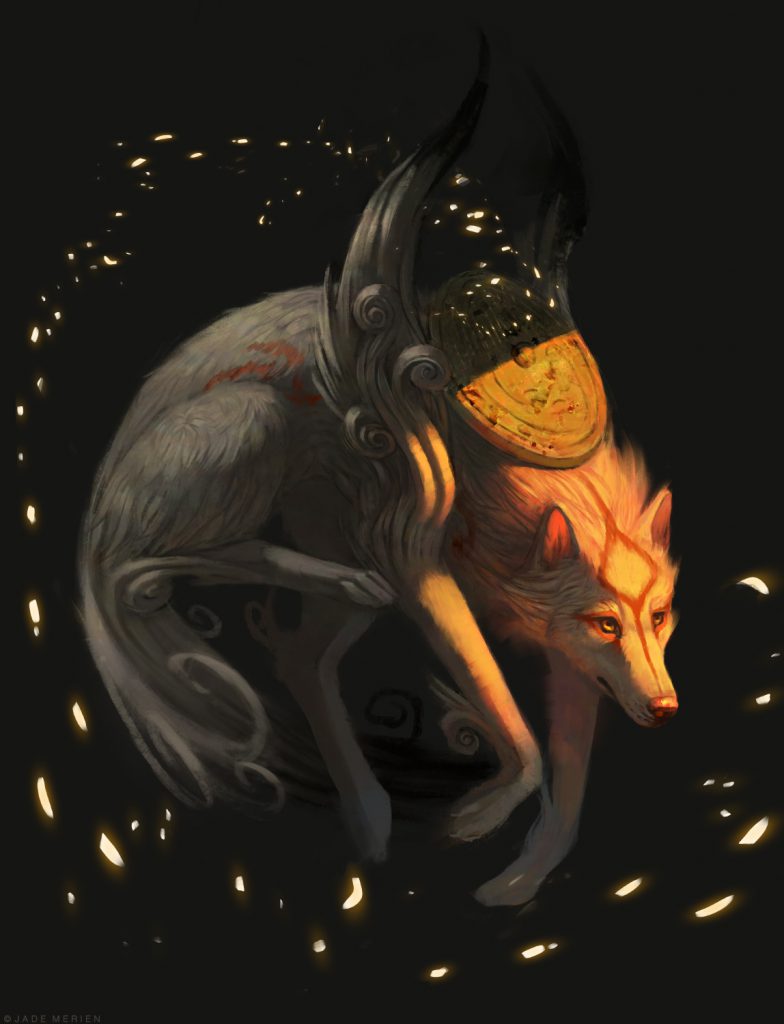 A painting clearly showing a being with divine power and duty. A lot like the “Sun Queen” painting above, but focusing more on the sense of duty within Ammy, rather than the approaching “divine retribution” that awaits the world’s poisonous demons. Both paintings however, show Ammy being of an otherworldly power. 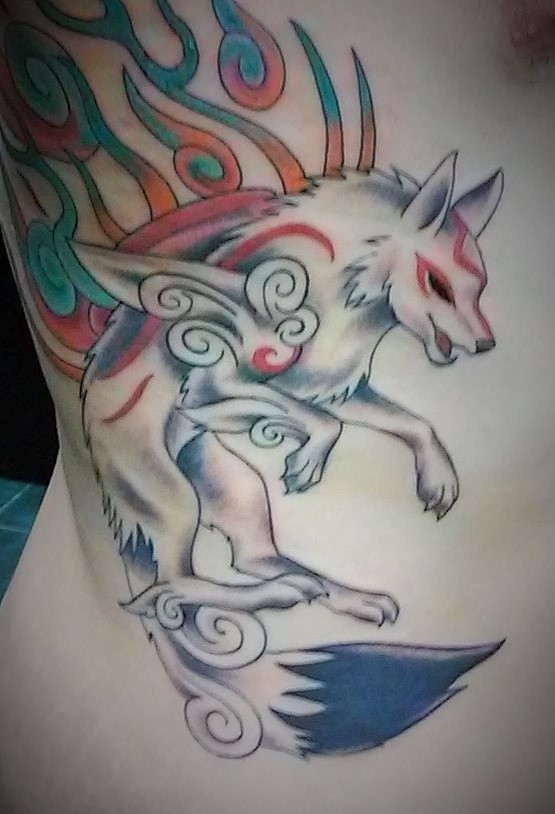 Reminds me of a bloke I saw only a few days ago, who had Ammy stickers on his car. This surprised me, because I live in South Australia and was shopping at a pretty out-of-place shopping center. Ammy fans are everywhere, it seems!
While I won’t be getting any tattoos of anything any time soon, putting cute Ōkami stickers on my car is a nice idea!

Here’s a picture that I managed to snap – he was in quite a hurry, so it’s not perfect: 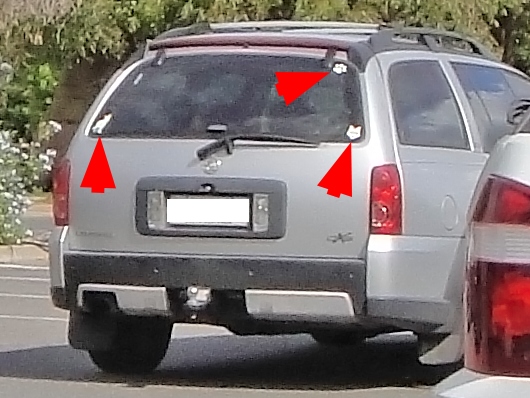 Ōkami car window stickers. On the left side, there’s a sticker of Ammy howling, top-right is a paw print and bottom-right is Ammy’s face.

The reason why I was able to snap that photograph of another Ōkami fan’s car, was because I had my camera out and was taking a picture of a funny car sticker nearby: 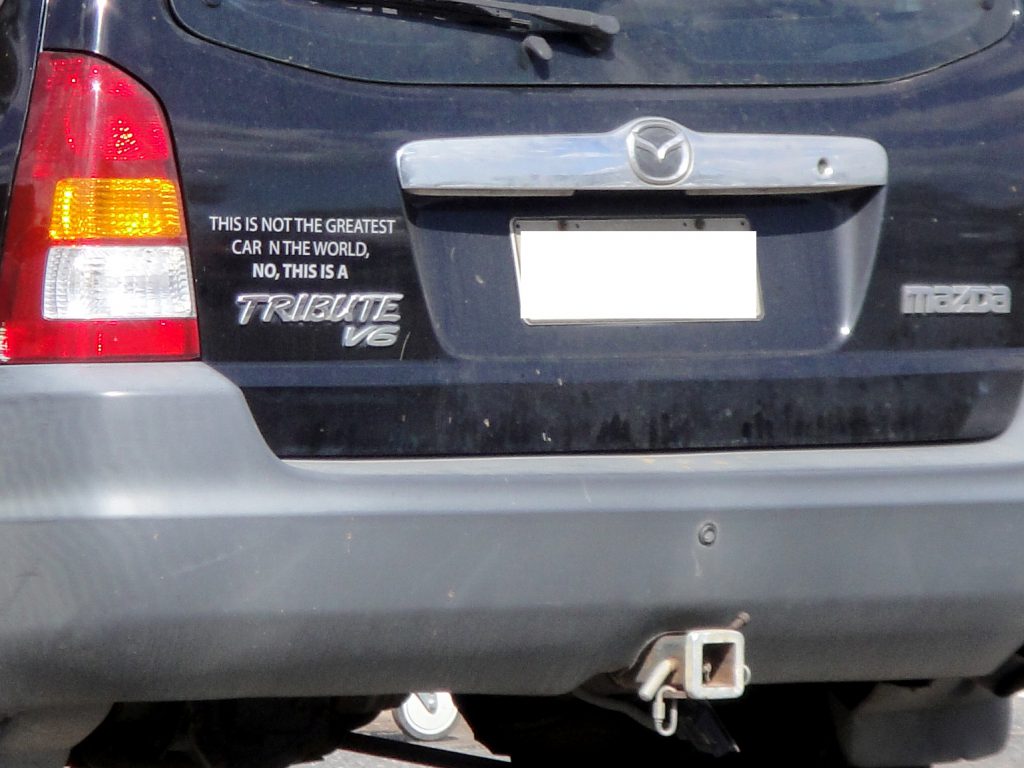 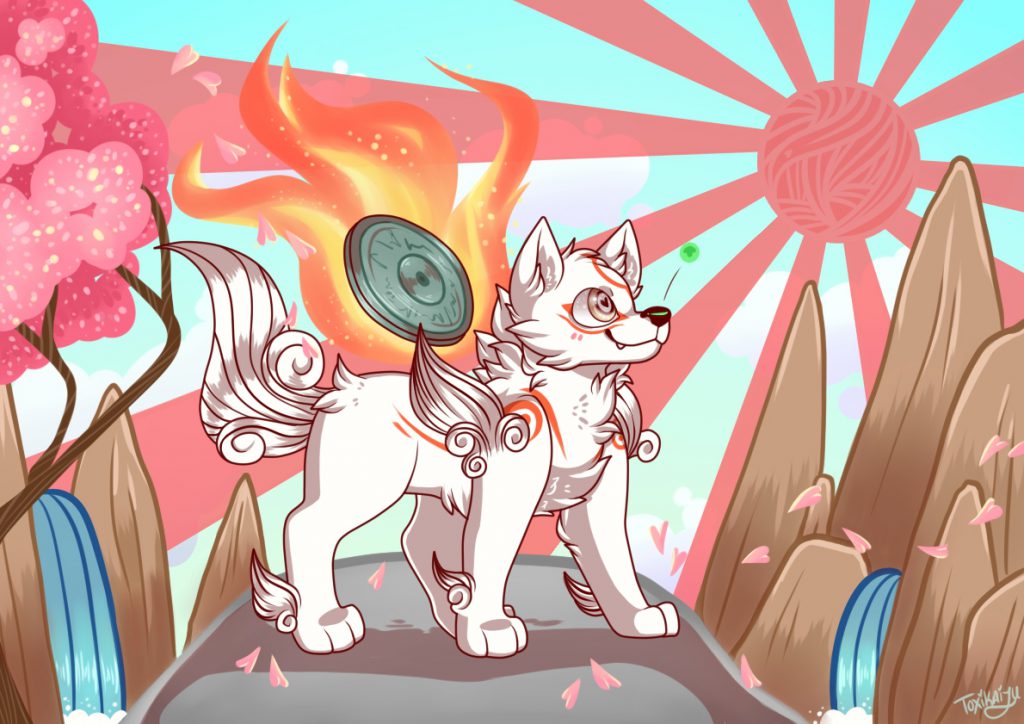 A very bright and cheerful picture of Ammy, on the top of the beautiful world and without a worry, Issun there too (bouncing on her nose) – everything going their way.

I’m not sure it’s possible to put any more youthful idealism into this scene; certainly something nice to remember.

Sweet Mother to Us All – by Jakxter 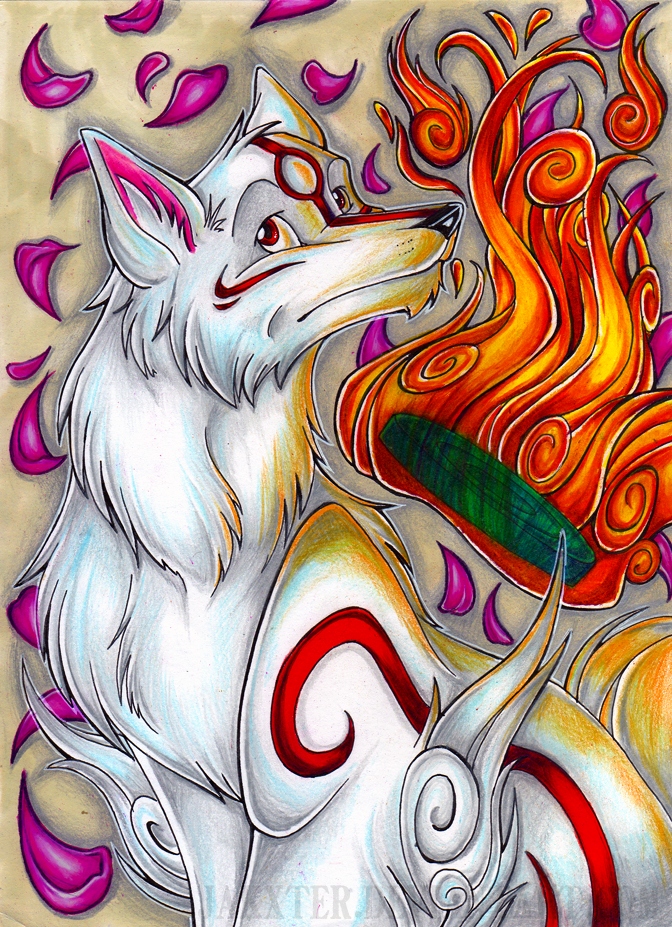 Ammy looking like there’s a burden and responsibility on her mind – being the only one who can save the world usually does that!
Ōkami’s prologue makes it clear that only Ammy can restore the story’s world. In case you haven’t seen the video showing this scene in my previous blog post, here it is again: 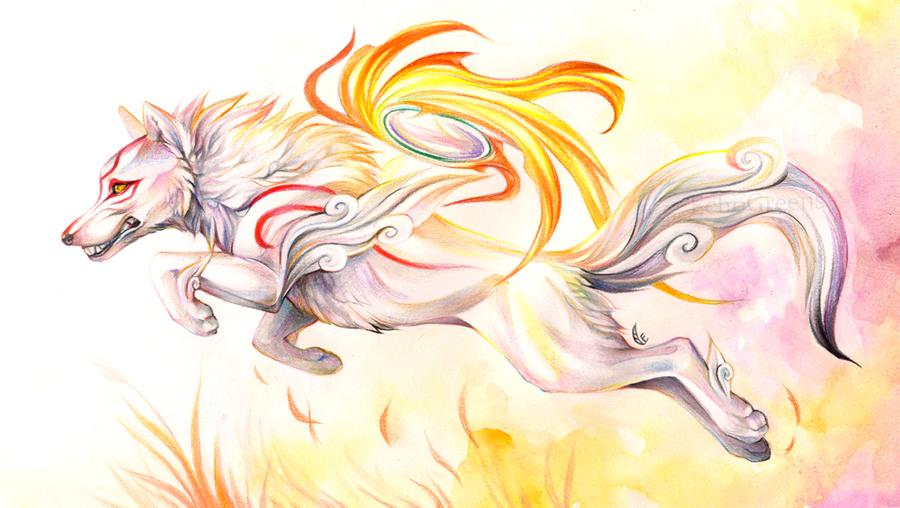 With apparently the same sense of responsibility and burden on her mind, Ammy springs into action but with an added sense of urgency! There’s sure to be more divine retribution in store, for some foul beast somewhere.

Mother to Us All – by HanMonster 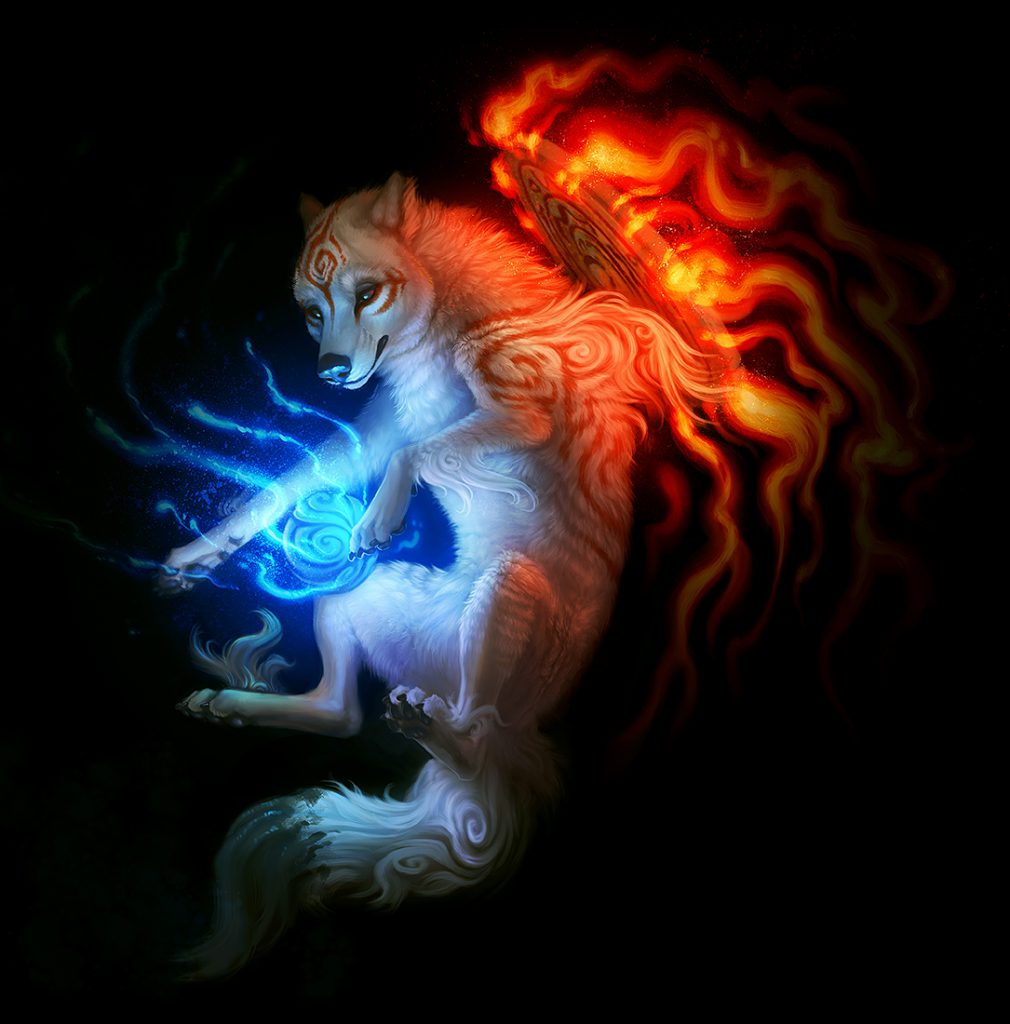 Definitely again a painting focusing on Ammy’s (Shiranui’s) divine power, rather than her sense of duty and resulting actions.
If an “eyewitness” were to remember Ammy like this, I suppose he or she would be doing it from a more emotional and feeling standpoint – “remembering” Ammy as a being of great divine power, and therefore a natural opposition to darkness. When there’s an opposition to darkness, as in purity and light, then the result would be less darkness.

Some people would prefer a more direct approach, that involves movement and taking action, whereas others are happy with a more symbolic and internalised certainty and expression. It’s interesting how different people can want to remember and support the same things, but in different ways. 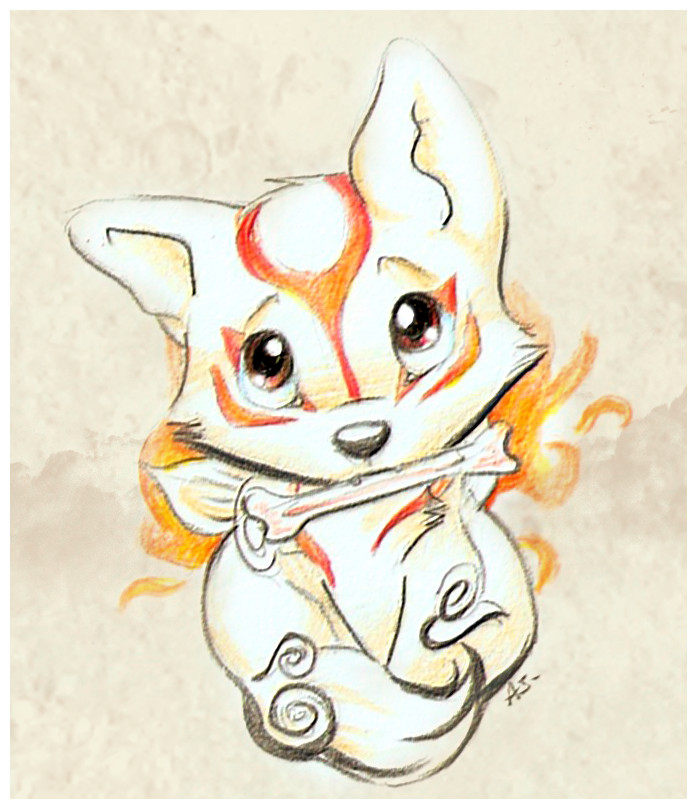 Ammy with big puppy-eyes and overall a fragile and gentle puppy appearance, being nourished by a “Holy Bone” to restore her “Solar Energy”, perhaps after a harsh run-in with demons.
Quite possibly “witnessed and drawn” by an adult with a strong sense of “nurturing” responsibility or a young person seeing themselves in Ammy’s approachable fragility – as a being who only wants goodness, in a tumultuous world. 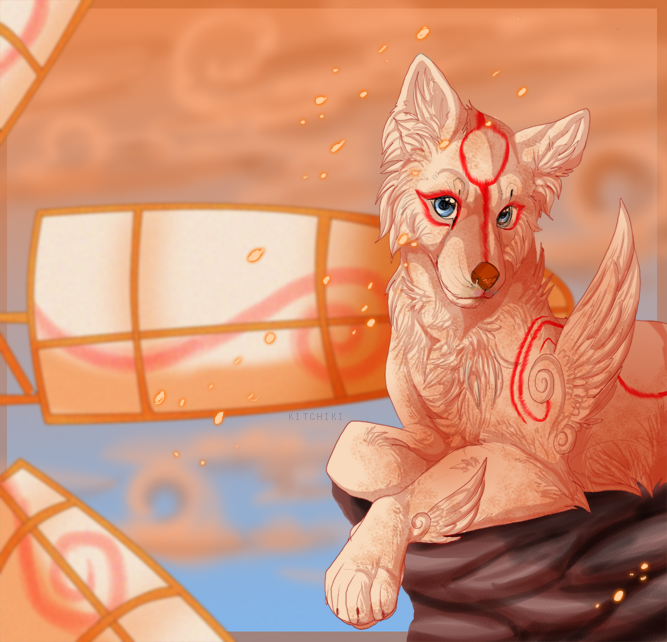 There’s definitely a sense of approachable friendliness in this painting as well. This painting shows Ammy at the “Gale Shrine of Kusa Village”, clearly after having restored the “Divine Wind”:

It’s certainly an interesting way that Ammy operates – first banishing demons and restoring nature and beauty, then resting and taking time for a friendly Listen-Lady session with the locals, and maybe the occasional pat on the head or neck-scratch.

Perhaps an interesting thing to note, is the fact that the shrine of human-form Shinto goddess “Amaterasu ōmikami” (the “Naikū Shrine” located in Ise, Mie Prefecture, first built in 4 BC)1 https://en.wikipedia.org/wiki/Ise_Grand_Shrine
(Accessed February 5, 2020)
https://www.isejingu.or.jp/en/about/index.html is fenced off to worshippers, who are only allowed to pray to Amaterasu outside the fenced area.2 “Begin Japanology – Shinto Shrine” video, four minutes and fifty-five seconds into video:
https://www.youtube.com/watch?v=nccRTm6hnug
In the Ōkami video game however, Amaterasu came to Earth as a white wolf (officially called “Ōkami Amaterasu”), who certainly enjoyed getting cuddles from nice people.

In ancient Japan, wolves were regarded as messengers of the gods,3 https://en.wikipedia.org/wiki/Japanese_wolf
(Accessed February 5, 2020)
https://en.japantravel.com/saitama/lost-sacred-wolves-and-wolf-worship/46262 so from that perspective alone it’s already reasonable that Sun Goddess Amaterasu came to Earth as a white wolf in this video game’s story.

The connection between Japanese deities (gods/goddesses/spirits), wolves and the Ōkami video game is even stronger when looking at its title: The word ōkami (

) in Japanese means “wolf”, however this word when spoken can also mean “great deity” – the words are pronounced identically.
Furthermore, when writing “great deity” in Kanji characters, these character (

) are also used when writing the name Amaterasu-ōmikami (

Personally, I think that’s a cute idea – Amaterasu in her human form being all majestic and godly during the weekday, and then on the weekend letting her hair down (as a wolf) and smashing and slicing hordes of demons into pieces, then visiting adoring locals for cuddles and snacks.

Speaking of praise for a job well done: The next post will pay tribute to Clover Studio, and all the people who worked there to create Ōkami – one of the best video games ever made.