The road ahead for this Ōkami fansite is clear – I will continue to update it with fresh Ōkami news and content throughout 2021.
I also have strong suspicions that we’ll get some big news about an Ōkami sequel this year!
The road ahead for mankind in 2021 is a little less clear of course, but allow me to share some positive thoughts about the real life good vs. evil battles that the world is being dragged into. 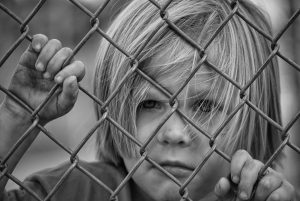 It seems that things are getting pretty dicey, that the world’s freedoms are being restricted and have been chipped away at for a long time.
Given the series of accelerating mad events in virtually all areas of life, chances are that one would have seen real trouble ahead for quite some time.
Everyone who has a bit of music in his/her veins, would likely have noticed that our (Western) civilisation is artificially being driven (by mostly unelected and interconnected human forces) towards a point – a situation so incalculably inhuman and dark, that it could even unite enemies to counter it. Despite our differences, we are at this fragile point at least, still human. 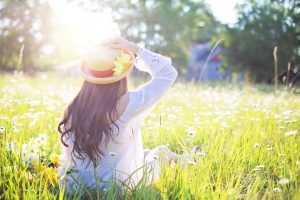 Beyond all of the terrible things that we see, no matter where we look, left or right or down the middle, there are always positive truths and powers that rise above the spectacle and nightmare.

Surely, it must be an act of deliberate self-destruction, to knowingly reject the greater (Divine) forces and wisdom that have carried us throughout our journey of life, as a people.

Whether it’s a popular and effective self-improvement coach, or a trusted Scripture, both would probably teach about the power of certainty, purpose, connection with people/life, self-betterment, discovery of new things, contributing to the world in some way, rejecting fear.
If one looks at this (non-exhaustive) list, perhaps one can discover examples of how the (in)human forces of darkness are either intentionally blinding people to such things or using them against people and leading them astray – astray from God, or astray from becoming the best that mankind can become (as beings created in the image of God).

As darkness seems to be closing in on democracy, liberty and life, it may be helpful to think about the visit of St. Pope John Paul II to Poland in 1979.
At that time, Poland was still suffering in most areas of life, but St. Pope John Paul II’s visit marked the beginning of the tide of hope and humanity that would finally overwhelm the rule of the contrary. 1 (https://www.whitehouse.gov/briefings-statements/presidential-message-commemoration-40th-anniversary-pope-john-paul-iis-first-pilgrimage-poland/)
However, it wasn’t St. Pope John Paul II alone who had put an end to communist rule in Poland, but it was the unified and energised people of Poland, and they had a silent force on their side (such as the believing in the Godly Power) that was mightier than the negative power that had been suppressing them. 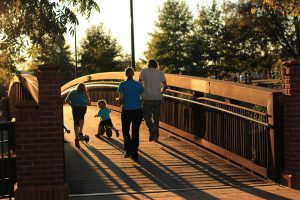 One can hope that during this worldwide expansion of darkness, there remains the understanding that intense positive concentrated thought (whether praying to God, or recognising the own positive strength and the power of good) does indeed work, and especially when united it can stand up to even the greatest of dark situations.

Here are five different messages from four popular people, regarding their own thoughts about our individual and united strengths, our ability to persevere against darkness, and our future.
One message is from someone who describes himself as generally secular, one message from someone who describes himself as Christian but had not yet fully read the Bible, and the other messages are from a prominent Australian Christian lawyer, and pastor: 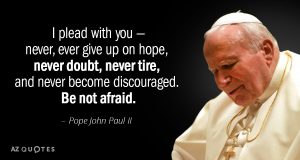 I plead with you – never, ever give up on hope, never doubt, never tire, and never become discouraged. Be not afraid. – St. Pope John Paul II

Always remember that within you is a great positive energy and potential, so don’t let the fear and distractions inflicted upon society distract you from knowing this.

Do you have suggestions or would like to recommend some more helpful messages of peace and encouragement? Then feel free to get in touch.