What makes Ammy happy? Nature, beauty, friends, and simply life itself? Probably any of those things, but “borrowing” turnips may very well be all of those things at once!
Think about it; turnips are grown in the soil and part of nature, because nature is beautiful then so are fresh turnips… It’s with friends (Issun) that Ammy “borrows” them and she even makes new friends (a boy called Mushi and his dog Hayabusa) because of this, and the fun with digging and getting chased around is a thrilling reminder of being alive in a living world.

(In case you haven’t played Ōkami yet – there’s a point in the game where you can be cheeky and borrow turnips from a field, while being chased around by the corpulent female vegetable grower.)

Okay, maybe I’ve overthought things just a bit, but whatever makes Ammy happy is surely something she deserves more of. Today, I’d like to show my favourite fanart of Ammy being happy. Yay! 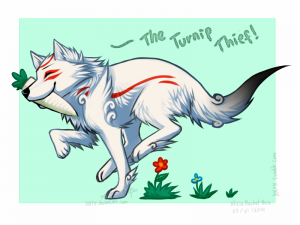 Click on a picture to see it pop up in a “lightbox”. All fanarts posted are my personal favourites. (Featured art: I’m Gonna Steal All Your Turnips – by Dolfiy)

Hmm, I’m going to have to ponder this for a while.

Gods and Brushes – by BrushAndTea 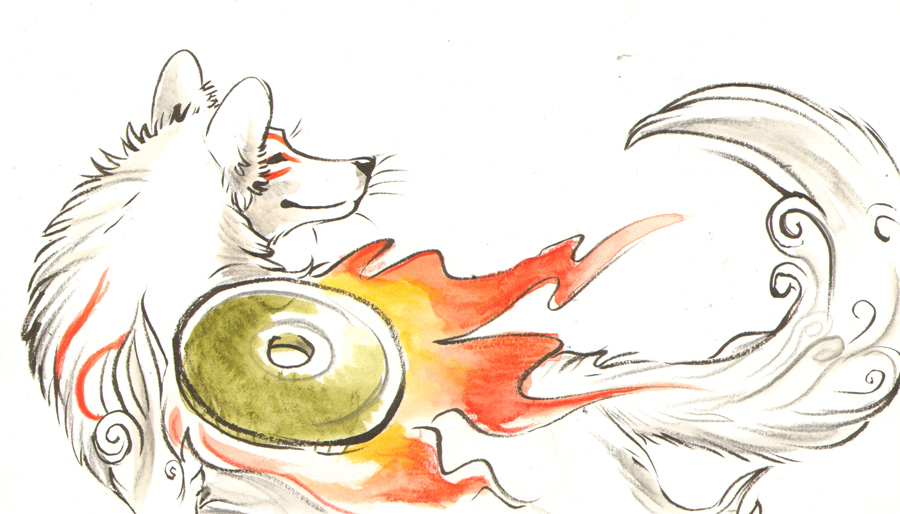 This artist probably draws the best wolfy-whiskers I’ve seen to date! I think that even Ammy’s proud of them, and walking around specifically to take her whiskers for a walk in the sunshine.

When you’ve rid the local village of demons and have some time to relax, then one can afford to indulge a little bit in such luxuries! 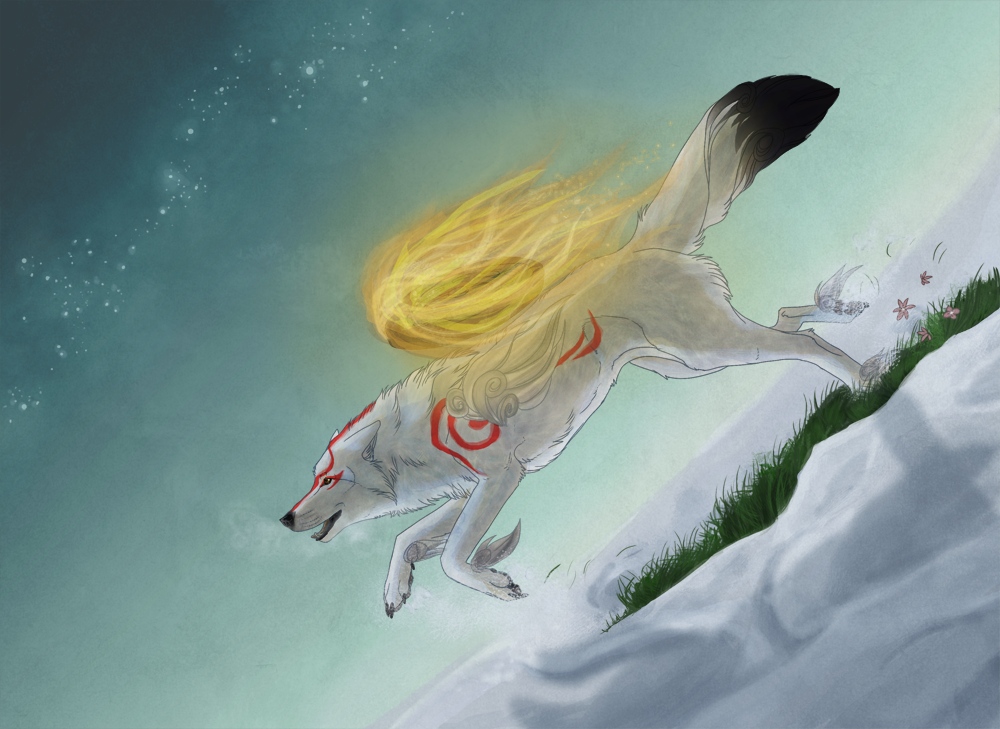 Seeing Ammy run through the snow like that, enjoying her surroundings kinda makes me a bit envious – I live in South Australia, and we frequently have days over 40 degrees Celsius (104 Farenheit) over here. In my area, sometimes it gets up to 50 degrees (122 Farenheit), yikes – although I’ve had plenty of cold days in winter, where I longed for the summer days.

In the winter, we sometimes get to ‑5 degrees or even lower – ice forms on my car’s windshield and the chickens’ water freezes over. The chickens would look at the frozen water, peck at it and wonder why they can’t drink and complain to me about it, so I changed it and then they were happy.
If you’re wondering why I’m reminiscing about frozen chickens’ water, it’s because we’re currently getting 38 degrees out here and I’m moist and sticky, which for a hairy guy like me is especially uncomfortable, but let’s move on from that confronting mental picture… 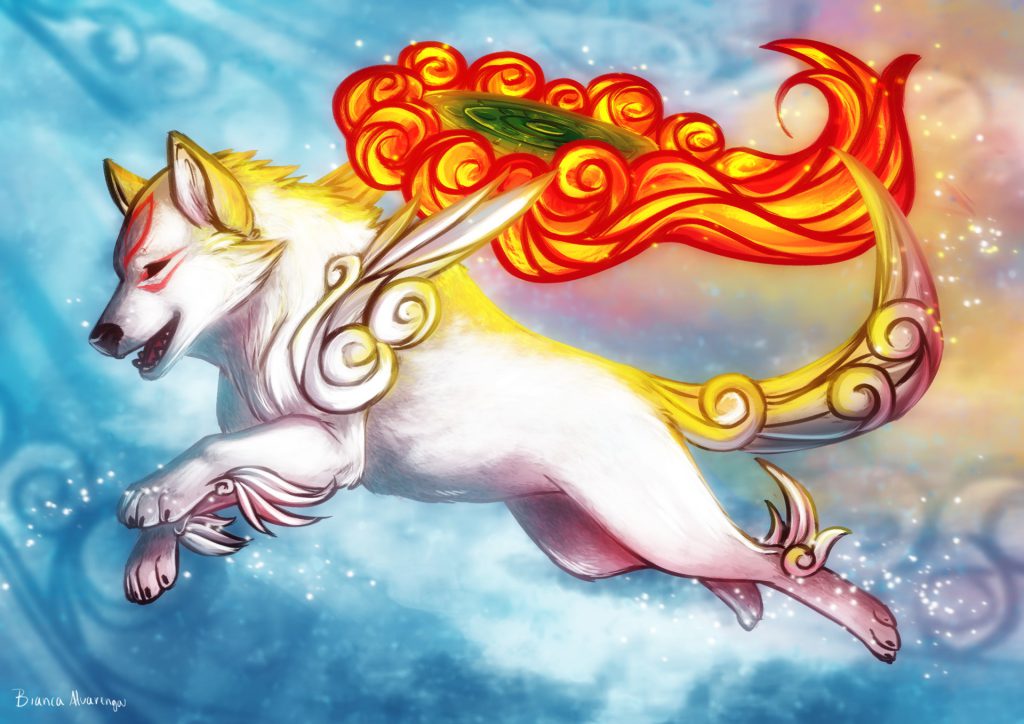 A cute painting of Ammy, just look at that smile!

She’s so happy to be leaping through the air like that. I like the glow of the flames from her Divine Retribution reflector on her fur and that cute cheek ruff.

I wonder where she’s running – it looks like she’s leaping through the clouds.

Where the Earth Meets the Sky – by DragonDodo 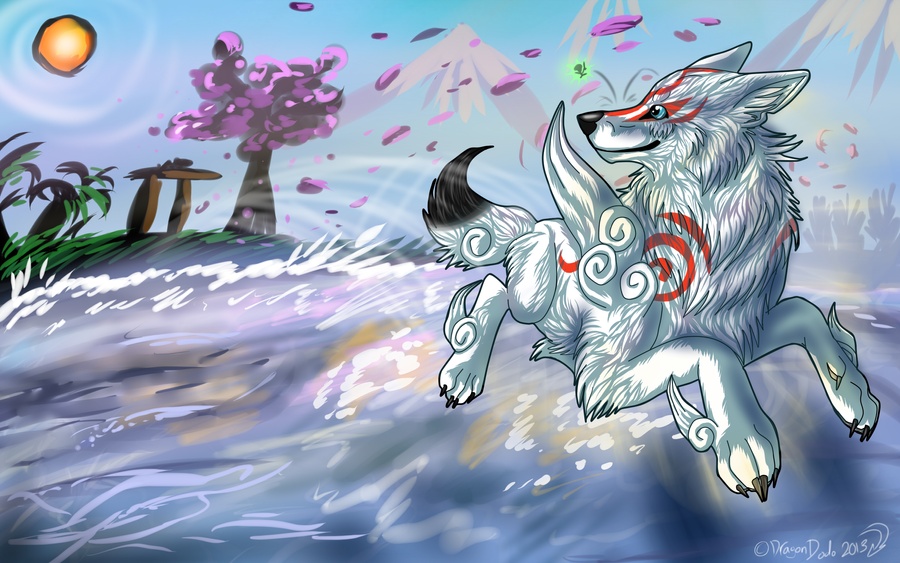 Judging by the healthy plantlife on the land that Ammy’s looking towards, and her pleased and accomplished expression, I’d say that she just restored the area back to full life. She’s admiring her handiwork from a distance – getting a final “beautiful postcard” overview. Well done, Ammy!

Issun better hold on to that neck fur instead of just bouncing about – Ammy looks like she’s running over that water at really high speed.

Since Ammy’s not running on lily pads, she must already have the handy “Water Tablet” that allows her to run on water without having to “create” lily pads to run on. (Goddes Ammy can create plantlife.)

Now that Ammy can simply run on the water, I wonder how Orca (an anthropomorphic whale character) feels about not being able to take her on adventurous rides through the water anymore.

He was so happy whenever she jumped on his back to go swimming.

Trading Some Art – by Grypwolf 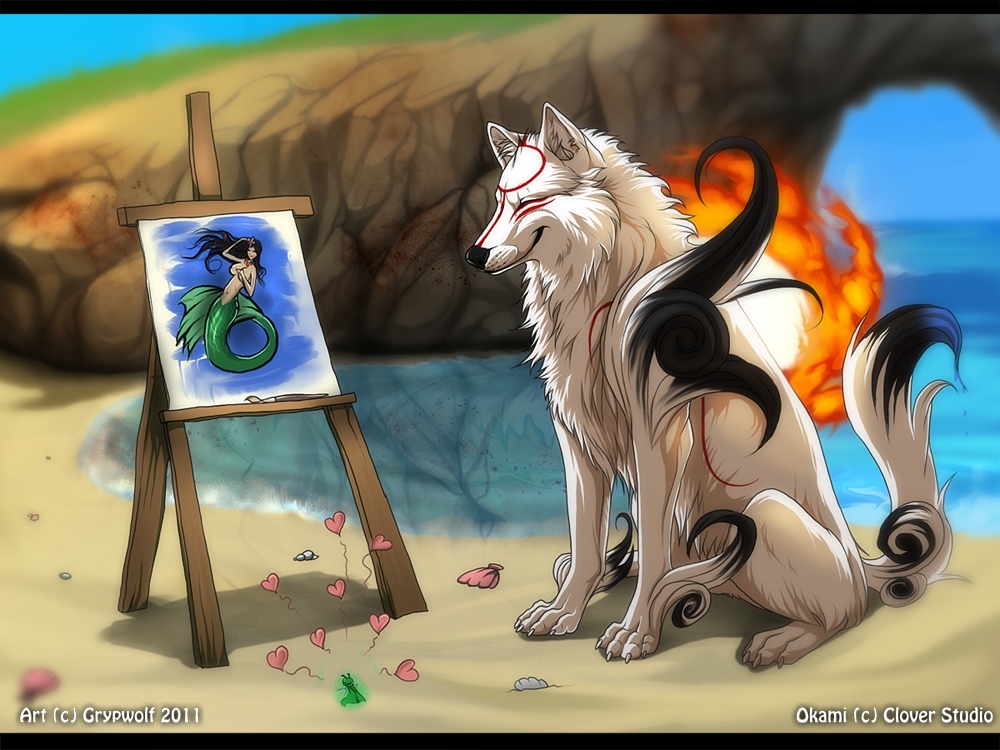 Wow, that must be the proudest expression I’ve seen on Ammy’s face yet! Look at Issun enjoying his present – Ammy knew just what to give that rascal… A painting of a beautiful busty babe, haha!

Looks like Ammy’s quite the wandering artist herself, and not just Issun!

Maybe she painted this present for Issun, to help him get over losing his “busty babe” crush called Rao (a sexy human priestess) – Ammy’s such a good friend to him. 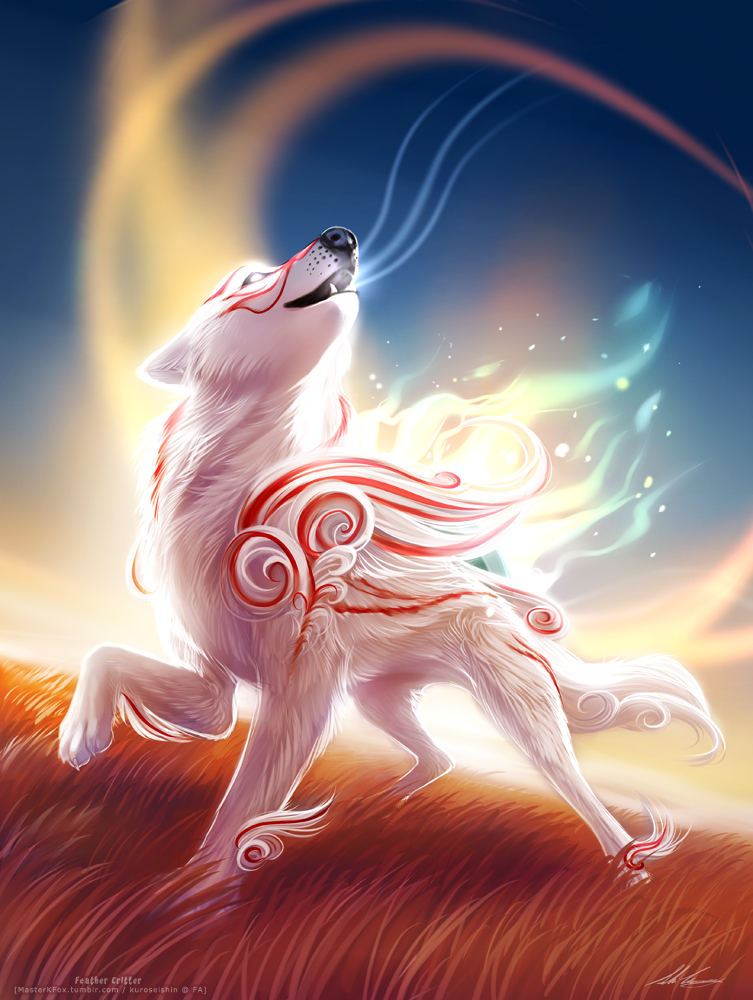 Being a sun goddess, it looks like Ammy’s powers are flowing through her as she’s looking towards the sky. Just an observation, but I suppose being a sun goddess allows one to stare into the sun without damaging the eye’s retinas.

Here Comes the Sun – by TheOutli3R 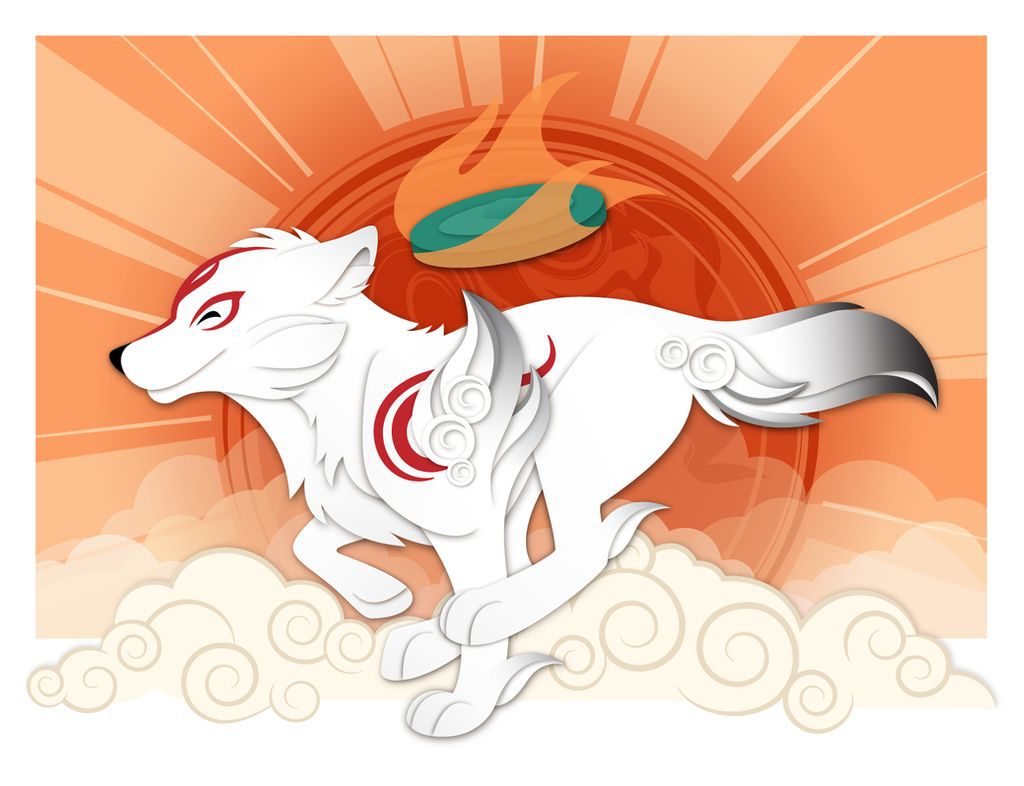 Such a cute face and mighty sun in the background, clearly everything is going right for Ammy in this painting (including those cheek ruffs) – which is nice to see!

The papercraft effect isn’t often seen Ōkami fanart, and I can only think of one other painting that has it – looks good, I think. 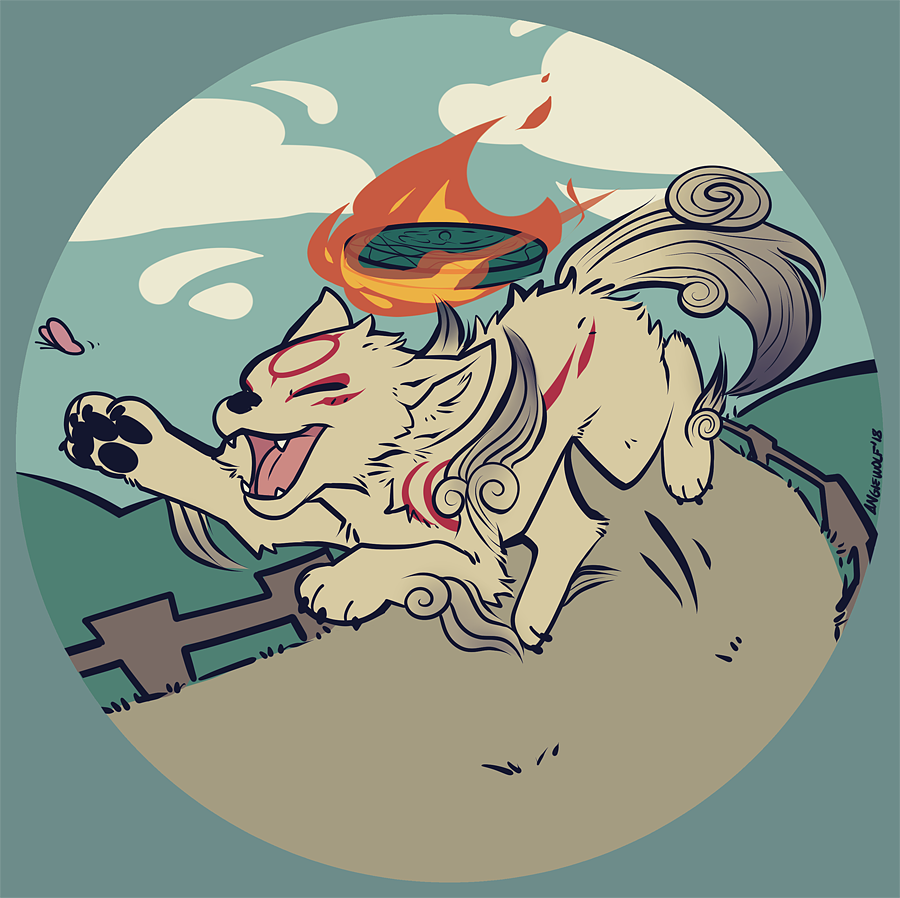 One of the advantages of restoring nature, is getting to play with and feed the animals that return. In this case, a butterfly seems to have been (un)lucky enough to fly past Ammy, as she reveled in the rapture of experiencing another beautiful restoration of nature, and simply couldn’t stop herself from chasing after it like a kitten high on catnip.

Amaterasu and Issun – by NiiteFox 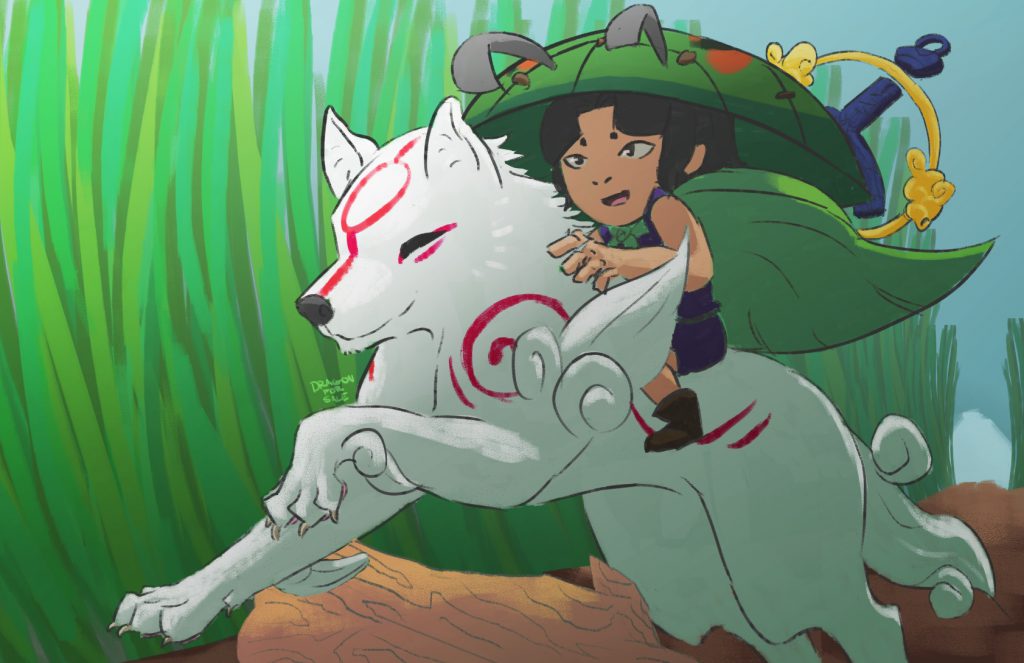 That has to be one of the most comprehensively pleased, content and happy expressions on Ammy’s face that I’ve seen in all of Ōkami’s fanart.
In case you’re wondering who that big guy riding on Ammy’s back is, it’s “tiny bug” Issun! He didn’t grow, but it was Ammy who was temporarily reduced to bug-size.

Happy Ammy and Critters – by Mamath 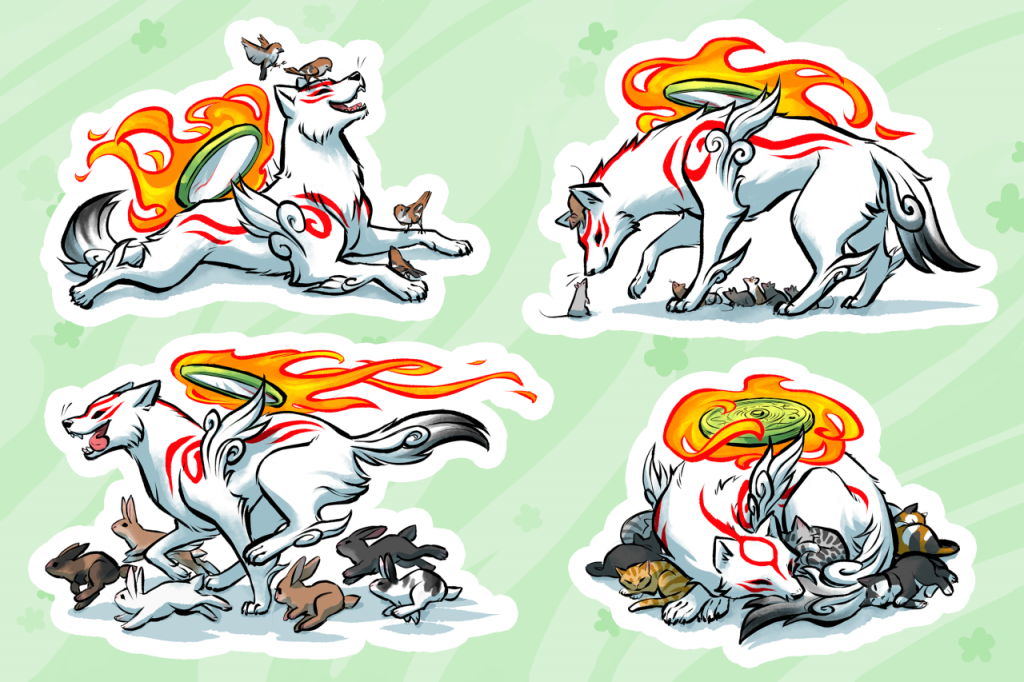 Aww, look at how happy Ammy is, being a perch for the birdies, protection for the ratties, racing-partner for the bunnies and cuddly pillow and heat source for the kitties.

For those who don’t yet know – In the video game you (Ammy) can buy large bags of animal food, carry them around and feed any animals you may come across.
It takes real affection for anyone to buy and then lug around bags of meat, fish, seeds and herbs, in case there are any animals nearby that could do with a meal. I’ve lived on a farm half my life, and can tell you – those bags are damn heavy!

Ammy’s true home is the Celestial Plain (Tamagahara; High Plain of Heaven), so I wonder what kinds of animals – if any – would exist there. Because the Celestial Plain seems to look a lot like a place on Earth, it would make sense for earth-like animals to be there as well. Otherwise, I would have said that part of Ammy’s enjoyment comes from spending time with animals that don’t exist where she comes from. 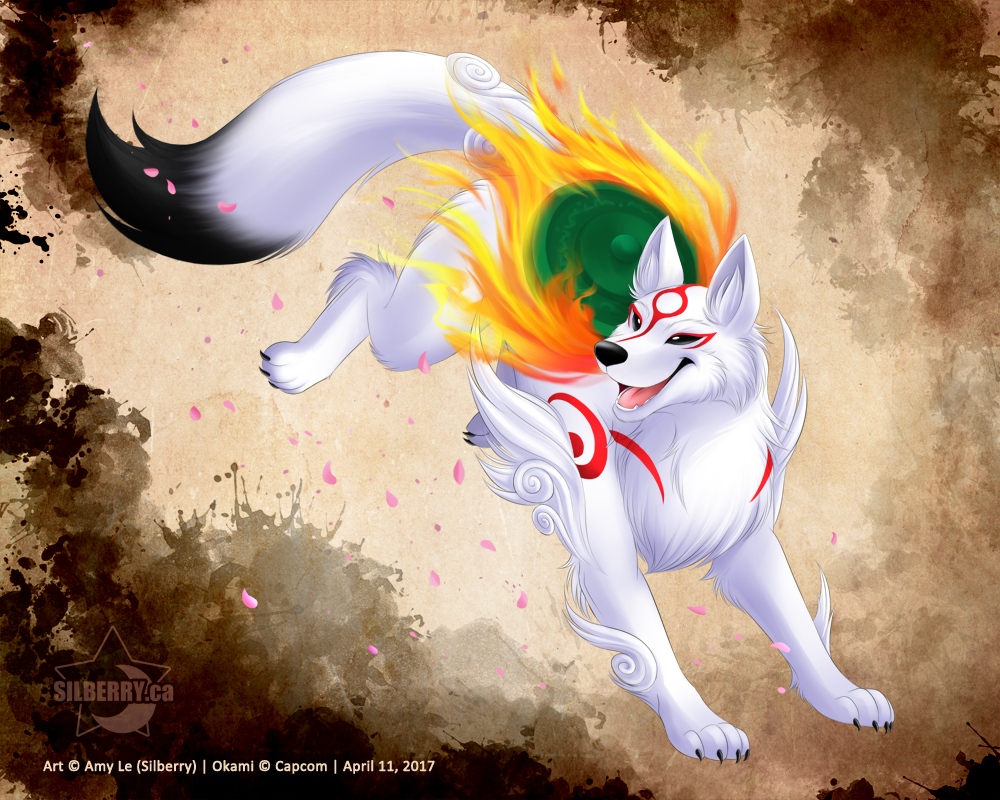 I think I know why Ammy’s looking so happy; Ammy just came from the groomer, and is looking F.A.B.U.L.O.U.S!
Just look at how silky smooth that fur is! She must have spent some serious Yen, and had her fur conditioned with only the purest flower oils, and then groomed with only the finest combs to bring out the fluff!

To be honest, I think she deserves to treat herself every now and again, and the results look and most certainly also feel great.

Stealin Your Turnips – by CaptainJohnson_b 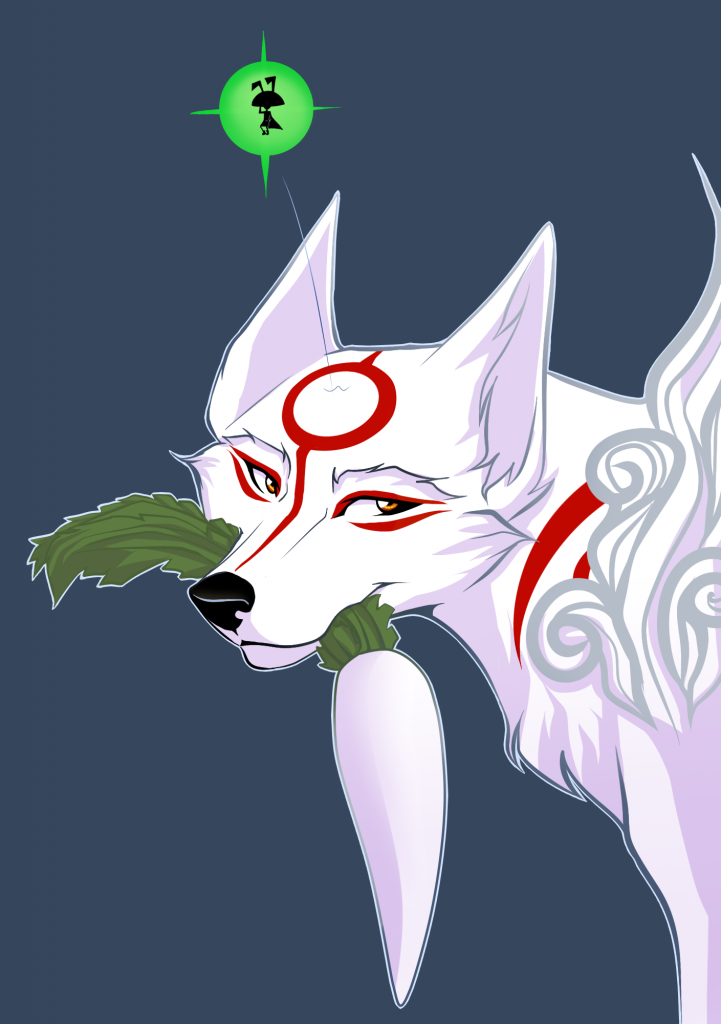 Hah, do I detect just a hint of smugness amongst that look of achievement on Ammy’s face? That is one fine lookin’ turnip she “found”. 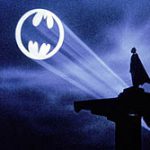 Also… Issun jumping like that with his glow surrounding him, reminds me a bit of the Bat-Signal.

There’s a proven truth about humans; that they will steer towards what they are staring at. If you don’t want to head towards crippling fear and certain doom, don’t look at it – look at the beauty, joy and purity that is still around you. Even in the worst of times, if you look for it you will be able to find goodness and begin to free yourself from the bad.

The next Ōkami fanart post will show poster-type of artwork that looks like it was made to appeal to a younger, teenage demographic. Consider checking out and subscribing to this fansite’s Ōkami RSS news feed, so you’ll be notified once new goodies get posted.