The kind of artworks that Ōkami’s Issun (Ammy’s bug/friend) might paint:
Artworks that explain Ammy’s might and fitness to rid Ōkami’s polluted “Nippon” (ancient mythical Japan) of its demons, and inspire devotion towards Ammy amongst Nippon’s adults who have lost faith in the “Brush Gods”, or never had any faith to begin with.

These are works of art that depict a maturity and strength, that can only come with wisdom and experience, and a confidence that can only be earned by achievement. It is this kind of champion, that can still inspire confidence inside a jaded and tired heart.

The following paintings and drawings will show a more divine and ethereal view of Ōkami’s Ammy – the kind of lone and traveling warrior, who will tirelessly protect nature, mankind and animals from demons, as they get on with their lives. All this visiting (wolf) warrior needs to perform her divine duties, is devotion and prayers from the people of Nippon, to give her the strength. 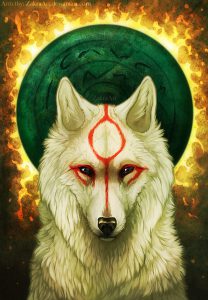 Click on a picture to see it pop up in a “lightbox”. All fanarts shown are my personal favourites. (Featured art: Sacred God – by ZakraArt)

A perfect painting to start off today’s post. Issun is certainly a talented artist.

Did you know that Ammy’s weapons in Ōkami (the mirror/reflector, the glaive/sword and the rosary beads) are based on the Imperial Regalia of Japan, also called the “Three Sacred Treasures”?1 https://en.wikipedia.org/wiki/Imperial_Regalia_of_Japan

Very few people have been allowed to see these important artifacts, and they are kept wrapped up inside wooden boxes – no published photographs of them exist. It’s likely that no person living today has actually seen the Three Sacred Treasures of Japan – instead we only have images to look at of replicas based on artist’s impressions.
During the Edo Period (1603 – 1868), a Shinto priest called Matsuoka Masanao claims to have seen (along with other priests) the sword while replacing its wooden box.
Apparently, gazing at this special sword (called “Kusanagi”) had brought great misfortune upon the priests, as all of them except for Masanao (who was banished afterwards) had then died of strange diseases.2 https://allabout-japan.com/en/article/1362/
https://www.ancientpages.com/2016/02/08/mystery-kusanagi-treasure-legendary-sword/
https://en.wikipedia.org/wiki/Kusanagi

Due to the (religious/symbolic) importance of the mirror (called “Yata no Kagami”, which represents the virtue of wisdom),3 https://en.wikipedia.org/wiki/Yata_no_Kagami it kinda makes sense for Ammy – a sun goddess in wolf-form – to have her mirror/reflector, floating behind her like that. (The mirror/reflector in this artwork is called “Divine Retribution”, in the video game.)

This is still a video game and not real life, after all. 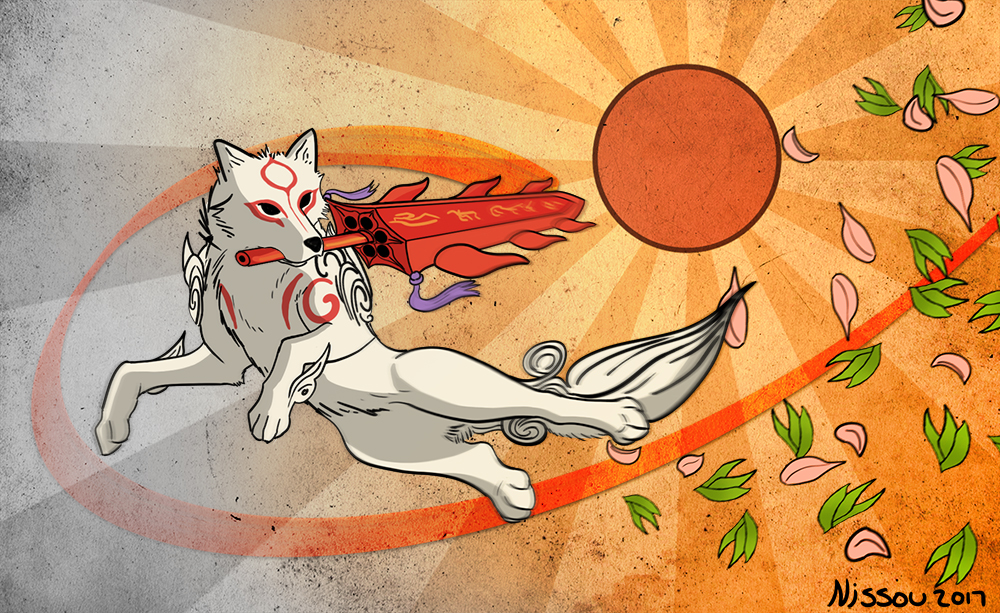 Effortlessly swinging a massive razor-sharp sword that probably weighs 250 kilograms, while leaping gracefully through the air, bright sun shining above and leaving a trail of crisp leaves and petals behind… yep, I’d say that qualifies as impressive!

May It Be – by Impalae 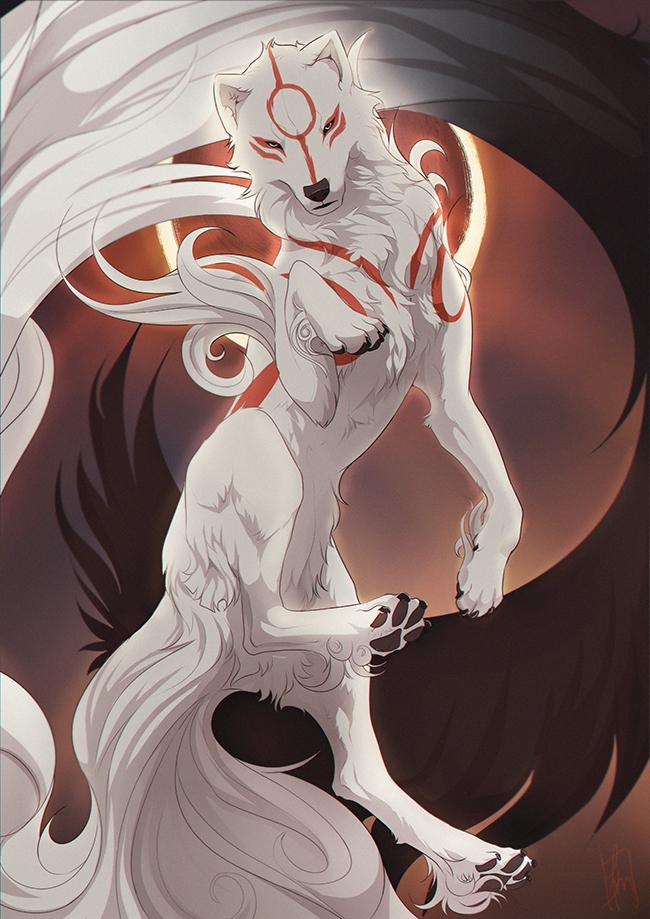 Speaking of impressive – look at that long tail and the fact that Ammy looks like she’s floating majestically through the air. That serious facial expression sure lets anyone know she means business.
An artwork, that clearly shows off Ammy’s otherworldly power.

Ammy and the Sun – by Mamath 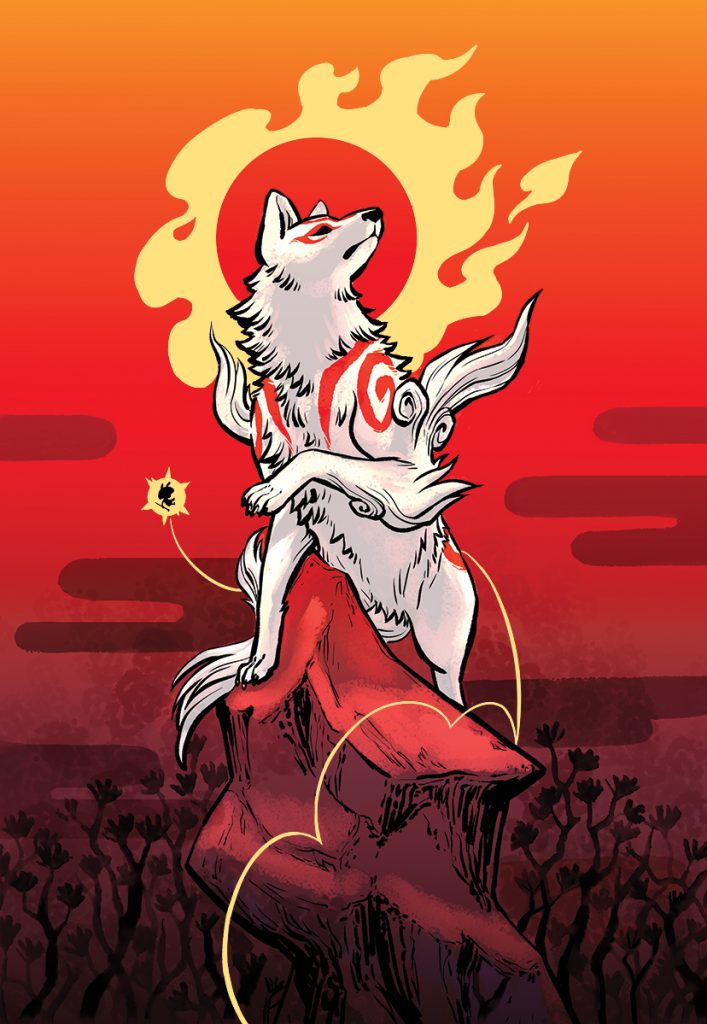 Looks like little Issun once again wanted to impress his audience with another great painting of his – he even painted himself and added an extra-bright glow around his person, so that people will instantly notice him.

Another dramatic and majestic pose – kinda reminds me of another heroine on four paws: Lassie!

To read my review of a book which shines a light on the efforts and lives of those who helped bring the legendary Lassie (and much more) into hearts and minds of millions of people around the world, here is a link to my blog post. 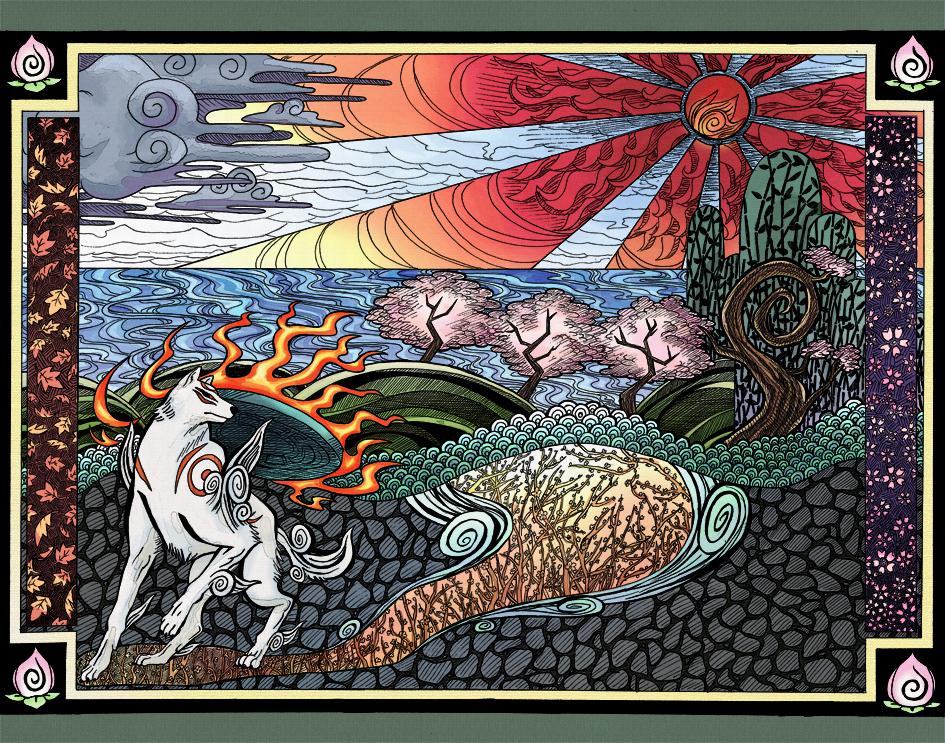 While all of the Ōkami fanart discussed on my blog is my favourite, I enjoy seeing fanart that looks “authentic” in some way – as though it had been drawn by someone from within the video game’s “universe” (such as Issun).
Lots of nice details here – the way the sunshine appears to be driving away the heavy clouds, the path that Ammy has walked showing emerging life (blossoming trees), the gentle sea and other healthy plantlife all around, and Ammy overlooking the entire scene.

If Issun had created this and given it to someone, it would surely have inspired confidence and faith in Ammy. 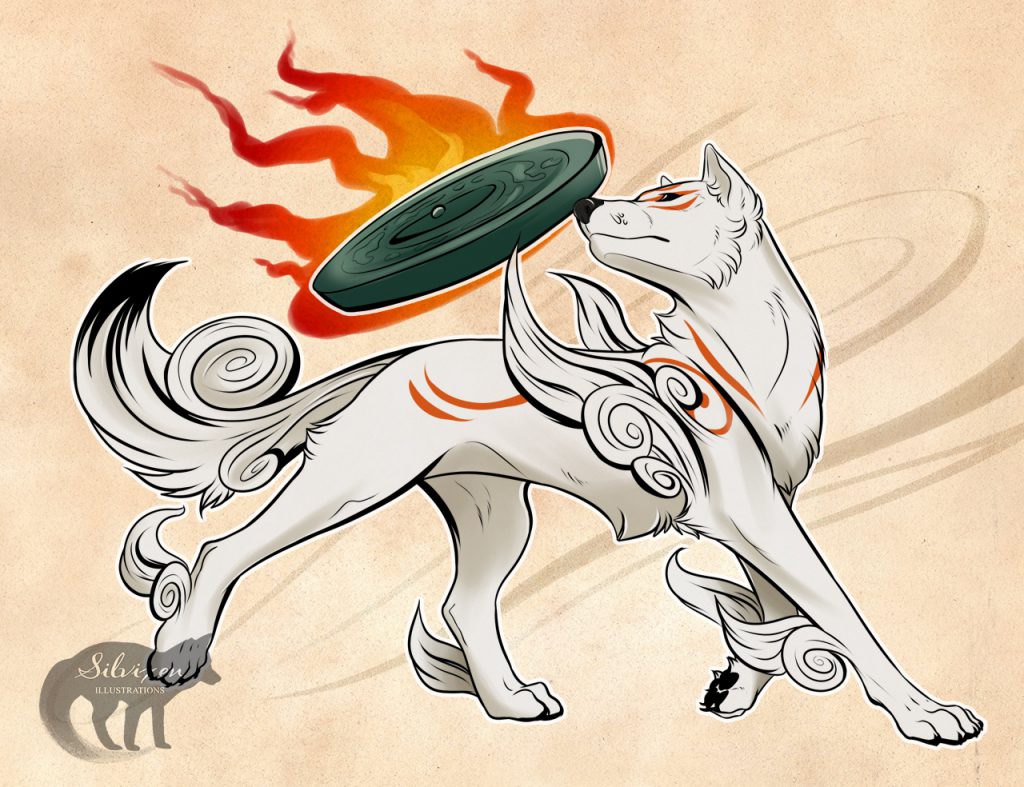 That’s a powerful hard-as-steel pose, and a super-confident stride – seeing that alone would be impressive, but the massive flaming “Divine Retribution” reflector that can be used to slice and smash demons into paste, is the “finishing touch”. Even the facial expression fits the scene.
Issun sure knows how to advertise someone’s strengths.

Above the Sun – by AkaiSoul 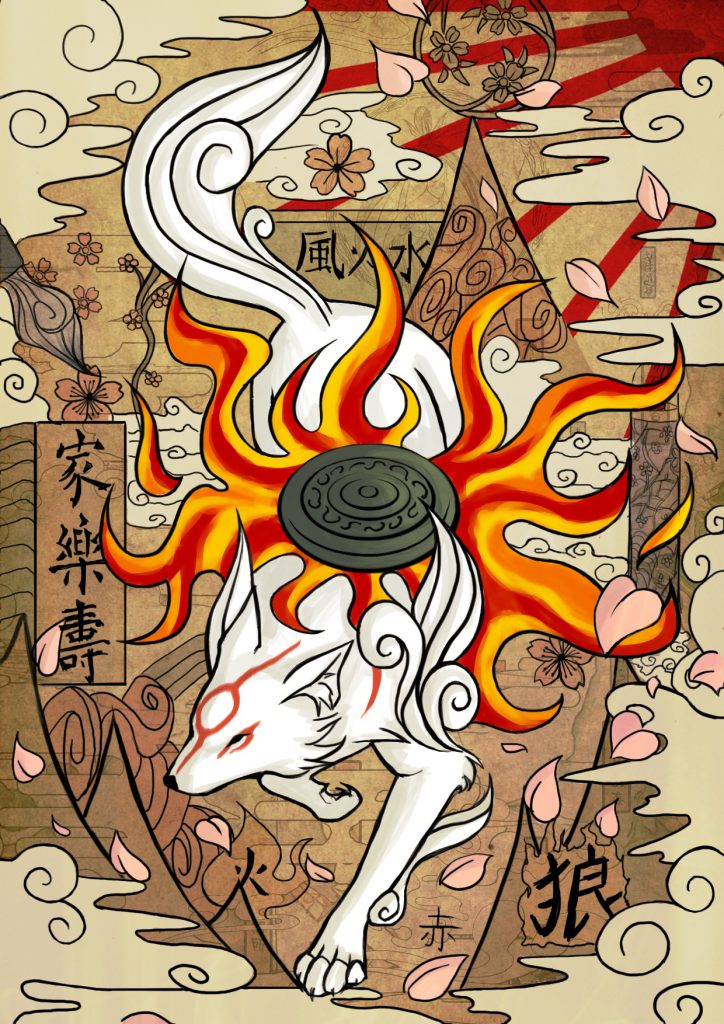 This looks like it could be from an ancient “Ammy Fan Magazine”. It seems that Issun had the “FanZine” idea first, and also many hundreds of years before we started seeing magazines about famous musicians, and other kinds of popular and influential people.
Issun was certainly ahead of his time!

This lovely Fanzine, which has poetry and lots of beautiful artworks, will be mentioned again (along with other such works) in a future blog post.

Trail of Paradise – by Moyan

This looks like a really old painting in my opinion, and reminds me of fine Japanese embroidery (dating back well over a thousand years and called “nihon shishu” in Japanese).

In fact, I’ve got a framed “Bunka shishu” (embroidery) artwork in my home and immediately thought of it, when I saw this Ōkami fan-painting.
Japanese Bunka shishu is a different, more fragile form of embroidery (used almost exclusively for framed artworks) and originates from the early 19th century.4 https://en.wikipedia.org/wiki/Bunka_shishu/

Back to the “Trail of Paradise” artwork: It’s easy enough to imagine this painting being rolled out by Issun, to go along with his descriptions of Ammy’s adventures. Perhaps he’d give it as a gift to an influential aristocrat in “Sei’An City”, or even to the Emperor himself, who also lives there. 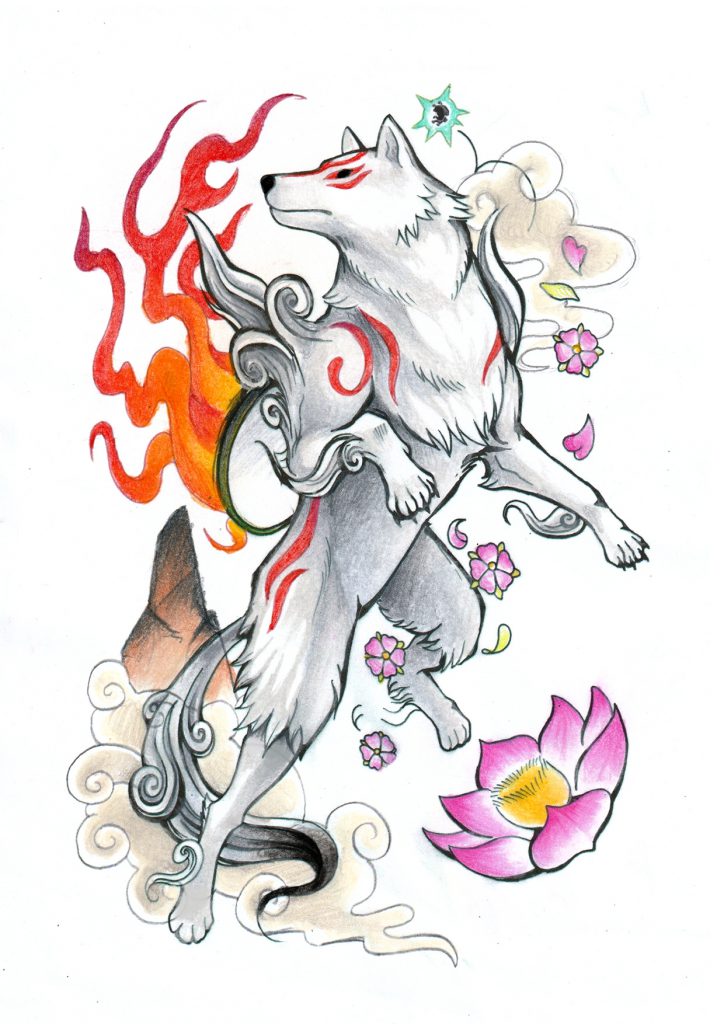 Well, if Issun had drawn this, I’d call him a little bit vain – he’s supposed to concentrate on drawing Ammy being majestic and godly, instead of “inserting” himself next to her face like that so that he can look good as well.

It’s like an ancient version of a “selfie” with a movie superstar, that one would upload to FaceScratch, InstaRash or Twerker and hungrily show off to try and get noticed by random people browsing the Internet.

Although, to be fair it’s probably a good idea regardless for Issun to add himself – he’s always with Ammy, and anyone who’s been near Ammy would probably have noticed his annoying chattering. Therefore, it’ll be easier for people to remember Ammy when they see Issun distributing paintings with him and Ammy in it. Pretty clever.

I remember my high school teacher telling the class about techniques to better remember things, such as associating whatever you’re trying to remember, with a story or another related thing. One of my teacher’s examples was, in the case of trying to remember a person’s name, to associate the name with an attribute reasonably unique to the person or situation: “Gavin with a javelin”, because Gavin is sporty and throws javelins.

There’s a computer store owner I knew who always had terrible dandruff, so I remembered his name by thinking to myself  “Dandruff Alex” – of course there’s a small chance of accidentally calling him “Dan” then. Not the nicest association, especially since he was a very nice guy, but it worked – this was well over twenty years ago now. I’ve had people say to me (when seeing them again after a long time), “wow, you’ve remembered my name” – well, of course I have! 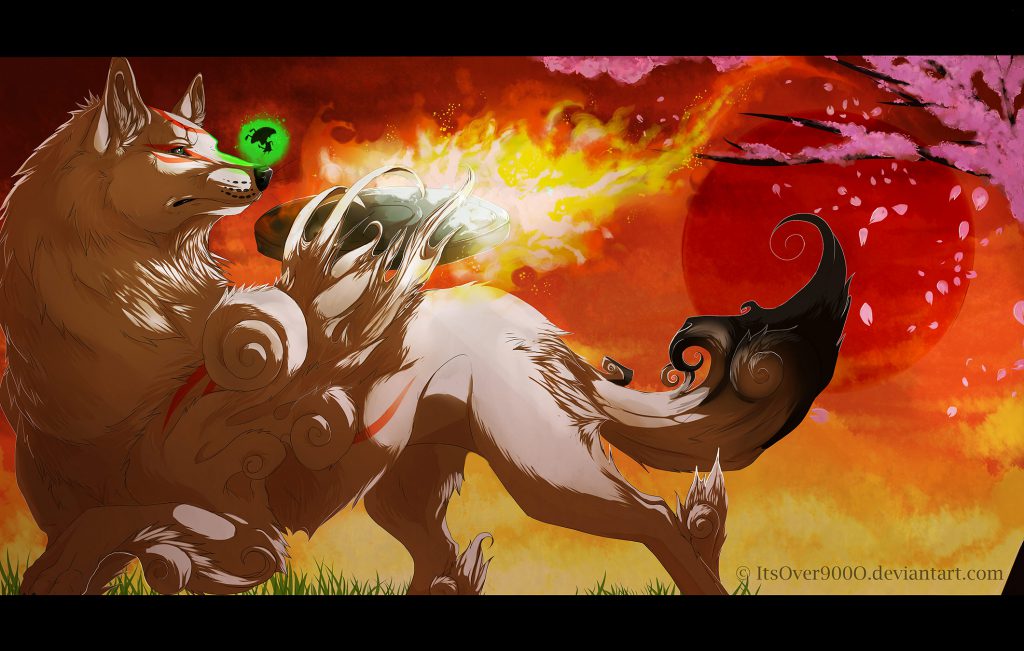 Part of being a god or goddess that fights evil, is also looking like one. Only those who already believed in the gods, could see Ammy’s crimson markings and Divine Instrument above her back.

If Ammy had walked around and only would have done all those common things that every ordinary dog/wolf is undertaking in its daily life, then people who didn’t believe in the gods would later never have believed that she was in fact sun-goddess Amaterasu’s reincarnation.

Issun’s paintings explained who (wolf-)Ammy truly was, all along.
Because Ammy had always proven herself (throughout the Ōkami story) by her positive and supportive actions, when Issun spread his paintings of Ammy amongst the people who had met her, it was easier for them to realise that she was in fact a Powerful Being who had been fighting for their futures. 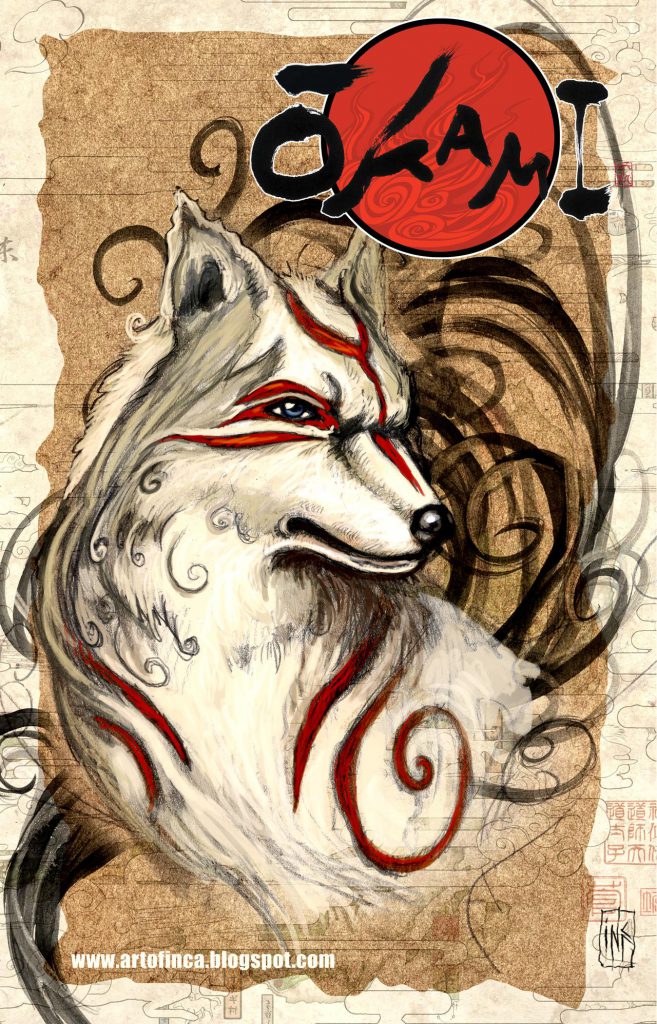 Portrait of Ammy looking strong and judgmental towards evil, and focused on the task ahead – now that’s someone to call, when you’ve got a demon infestation.
Forget the Ghostbuggers – they’re just commercial shills!

Look at all those extra-pronounced furrows and muscular brow on Ammy’s forehead – those smelly demons don’t stand a chance when confronted by anything capable of producing such mighty and judgmental forehead furrows and bursting-with-might brow, let alone a powerful sun goddess.

No, Ammy doesn’t need a brow lift – she just needs to smite some demons and plant a few trees! 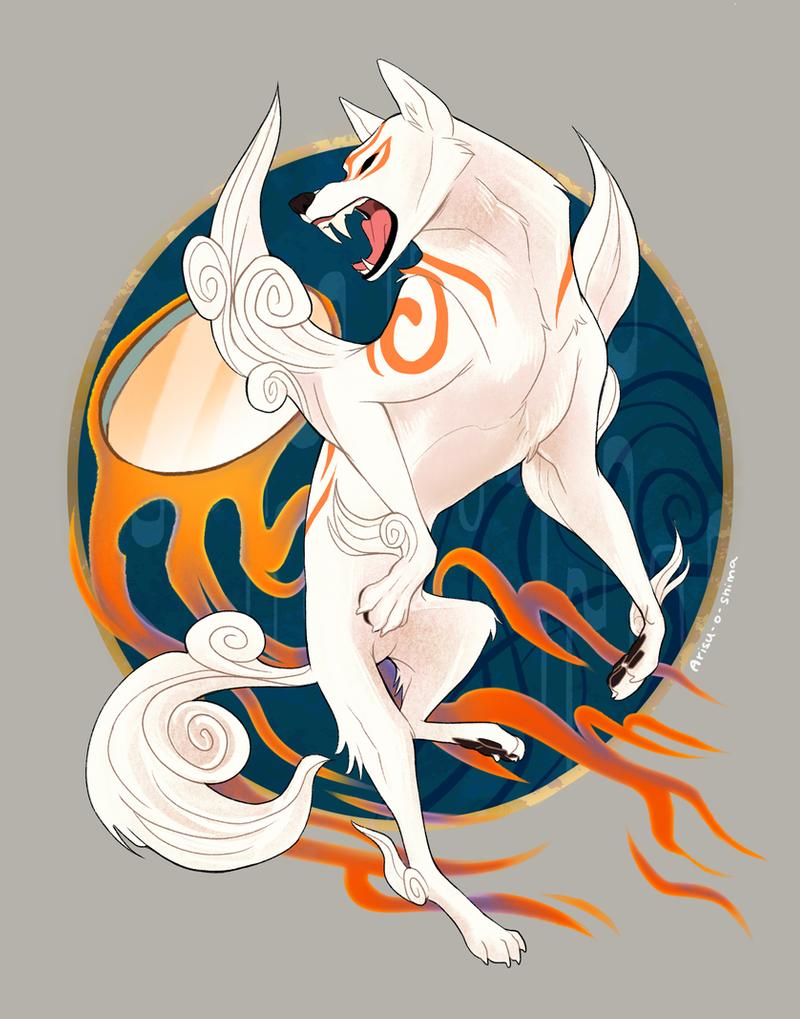 When Ammy temporarily loses her godly powers during battle, she’ll resort to biting and kicking demons into submission.

The people of Nippon who don’t believe in the gods could never see Ammy’s crimson Divine Markings or weapons, so they might strain to use their imagination on how she could realistically defeat any hugely powerful monsters.
However, pretty much anyone knows that dogs and wolves can bite fiercely, so a painting like this spread amongst the everyday people, might make more sense to some of them. 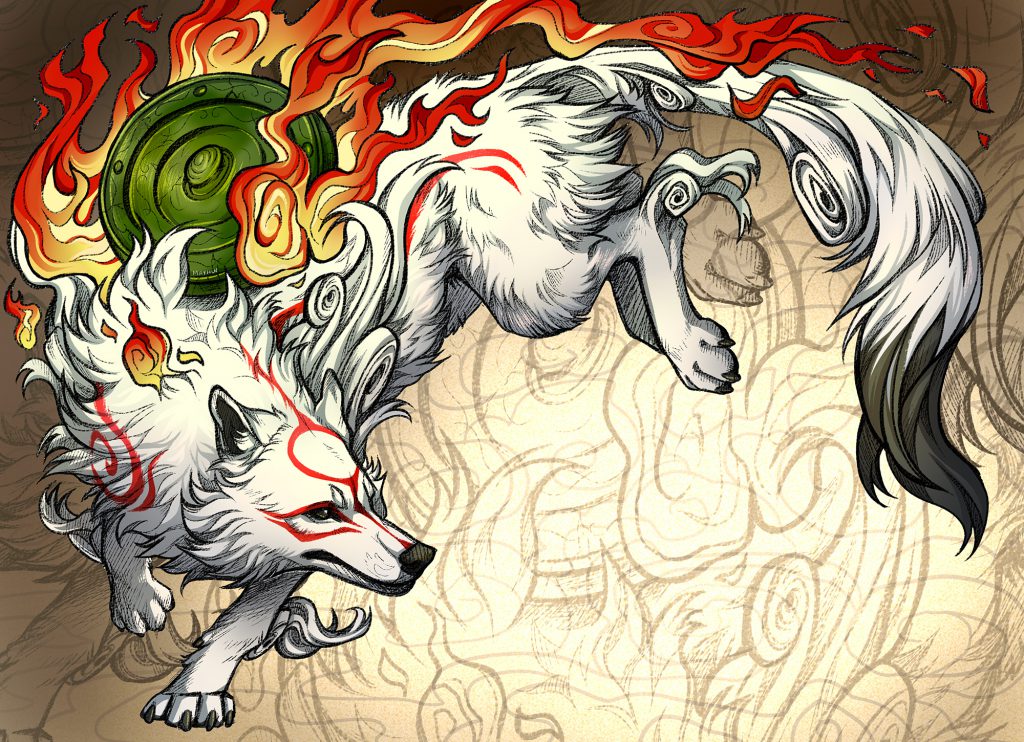 A very dynamic and concentrated moment of action, which suits Ammy very well; usually we see Ammy either running around and mopping the floor with ugly demons, training in combat, earning money and restoring nature, or she’s flopping onto the ground asleep within five seconds of standing still. (Such an admirable and disciplined work-ethic!)

Any paintings or drawings by Issun of Ammy wouldn’t inspire much confidence, if they showed her curled up and sleeping, despite how cute it looks. Clearly, Issun knows this.

Whoo, that’s the end of another blog post. This and the previous blog posts have all focused heavily on Ammy, so next time I’ll feature her friend Issun, in a blog post called “Magnifying Glass Over Issun!” Let’s hope Issun doesn’t overheat.

By Web Developer Ben – Fansite Founder and Owner.
Passionate dog person, but also likes cats and animals in general. Web developer and online producer, who became an Ōkami fan after coming across nice fanart eleven years ago and then playing the video game. Now inspired to do the same for other potential fans.
Do you have suggestions, would like to recommend some art or submit your own? Then feel free to get in touch or just leave comments, below: