In the Ōkami video game, are Ammy’s eyeballs black, empty voids, or some kind of expression of her spiritual energy? Why are Ammy’s eyes so dark?

First off, let me say that I have seen beautiful art of all these three eye-colour variations, and that I’m not criticising the artists or saying they’re “wrong”. My many blog posts showing my absolute favourite Ōkami fanart that other artists have drawn and painted are proof of that – my favourites have all three variations of Ammy’s eyes.

However, I would like to get to the bottom of why these three variations of Ammy’s eyes exist, and why I believe that Ōkami’s Ammy actually has natural/common wolf eyes.

My arguments for Ammy’s eyes being those of a normal wolf:

Virtually every single normal everyday human and animal in Ōkami is shown as having black eyes. It would be pretty creepy and illogical for all the animals and people in the “Ōkami Universe” to have completely black eyes, or even no eyes at all – black eyes are something generally attributed to demons, and not everyday life forms with souls.1 (https://allthetropes.org/wiki/Black_Eyes_of_Evil)

Secondly, Ōkami’s Ammy (goddess Amaterasu incarnated as a wolf) clearly wanted to walk amongst the everyday people and interact with them, to inspire faith in the gods.
If Ammy’s going to walk amongst the people and interact with them, it would already be peculiar enough to show up as a big wolf, let alone as a wolf with black (demon) eyes or no apparent eyes at all.

Why are the animal and human eyes in Ōkami black?

The reason why the eyes of people and animals in Ōkami were shown as black dots or lines, is likely because of the Japanese Sumi‑e (ink wash) painting style that helped inspire the video game’s graphics, but also because of the Playstation 2 (PS2) video game console’s hardware limitations:

The low resolution of the Playstation 2 on which the game was first released on, would not have been able to show the fine details required to finely “paint” the relatively small eyes for displaying clearly on a TV screen or monitor. The PS2 usually displays video games at a resolution of “480i”,2 (https://en.wikipedia.org/wiki/PlayStation_2) which is simply too low and blurry to reasonably show finely-detailed eyes, in most scenarios. Look at the Playstation 3 HD and Playstation 2 comparison of the same scene from Ōkami, and you’ll see far more fine details in the higher resolution PS3 version – especially in the distance.

Also, see the PS2 screenshot of Ōkami and look at Ammy’s eyes – the eyes are quite blurry and without much detail.
Most modern smartphones are capable of showing videos and games at least four times sharper than the Playstation 2, which is now over twenty years old.

Also worth noting, is that the Japanese Sumi‑e painting style values “simplicity” – using the fewest strokes of the paintbrush possible, to create the desired image. Reality is expressed by reducing it to its simplest form, while capturing the subject’s “spirit” or “essence”.3 (https://en.wikipedia.org/wiki/Ink_wash_painting)
If details only require a single stroke of the paintbrush rather than five or ten, then only a single stroke will likely be made.
In Sumi‑e painting, sometimes the eyes are simply represented by black dots, but can also be more detailed:

If you look through the Wikimedia Commons page on “Ink and wash paintings in Japan” then you’ll find lots of Sumi‑e paintings where the eyes of animals and people are painted either as dots, or with more detail such as eyelids and pupils.

The Japanese Ukiyo‑e (woodblock print and painting) style also seems to have an influence on Ōkami’s overall appearance, with its bright and bold colours. When looking through the Wikimedia Commons page on “National Treasures of Japan (paintings)”, you’ll also see lots of interesting and old Japanese paintings that have a similar style to Ōkami’s.
Here’s an informative quote from Naoki Katakai, who was the art director at Clover Studios when Ōkami was made:

Before making Ōkami, we had never really studied the many unique aspects of traditional Japanese art, such as ukiyoe paintings and kirie (pictures cut out of paper), in that much detail.
However, when we were collecting ideas and resource materials, we had quite a few opportunities to further examine these creations of the past. We found that these works of art were overflowing with a sense of design and layout above and beyond what we had expected.
We knew that Western artists felt a sense of culture shock upon seeing Japanese ukiyoe paintings for the first time, but even for those of us Japanese designers who had not seen a large number of these paintings experienced that same sense of culture shock. We became especially interested in and intensely studied the composition and framing of these paintings, finding what worked and what didn’t.

Naoki Katakai, “Ōkami Update – The Art Style”, GameSpot.com
(I had no idea that Kirie paper cutting was also an influence on Ōkami’s art style.)

So, why are Ammy’s eyes still shown as completely flat black in modern official art and merchandise – we now live in the age of high-resolution video gaming, right?
Most likely because that’s how people know Ammy, and it’s simply easier to just keep the eyes black, rather than explain why Ammy has more detailed and “natural” eyes than a few years ago.
To be frank, in my opinion the latest Ōkami (Chibi) Ammy figure would have looked better and friendlier, without such prominent black areas for eyes. Even in Sumi‑e painting, the eyes of humans or larger animals are rarely “simplified” that much.

Of course, it could just be the “style” of the Ōkami video game.
I feel however, that it may now be time in our high-resolution era, to modernise the video game characters’ “look” a little bit – at least for the much-anticipated sequel.

Do dog (or wolf) eyes in real-life look black? 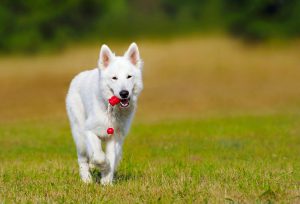 Dog/wolf eyes certainly can appear black, especially when light isn’t directly shining on them – mostly they have dark brown eyes.
Some dogs are going to have light blue eyes or “golden eyes” (light brown highlights), which will of course be more obvious. 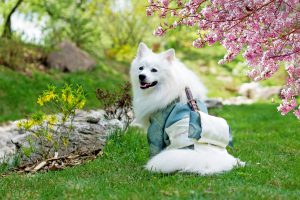 However, unless the animal is in near complete darkness, there’s going to be a visible reflection in their eyes.

If you’re only looking at these thumbnails of the two white dogs, you won’t see such finer details though. The “appearance” of black eyes, doesn’t necessarily mean it’s somehow unnatural.

What is the future of Ammy’s eyes?

Likely, the eyes’ future will be brighter. Nevertheless, maybe it’s because I’m a bit biased due to being such a big fan of Ōkami, but the variations of Ammy’s eyes in fanart don’t really bother me.

I do want to mention though, that I only found out about the Ōkami video game through its fanart. After seeing Ammy’s black eyes for the first time, my first impression was that she was in fact a destructive wolf-demon, and not a benevolent goddess. It took me a few moments to work out how a supposed “demon” is actually “nice”. The percentage of people (across different cultures) who get this kind of first impression, isn’t something that I’ve checked yet.

Once I took the time to learn about Ōkami’s characters, and look at the official video game art from Clover Studio/Capcom, things started making sense to me.

Had I first come across Ōkami’s official art, with its apparent Japanese Sumi‑e inspired painting style, then my mind would have known right away that the eyes are only shown as completely-black due to the style they were painted in.

When a fan artist paints Ōkami’s characters, and does it in a style that is finer and more detailed than Sumi‑e, then I feel it makes less sense to paint the eyes black – as they are likely more a result of Sumi-e’s stylistic influence and the PS2’s relatively low resolution.

Personally, I’m hoping that when the true sequel to Ōkami gets made and released, that Ammy’s eyes will be those of a common wolf.
Computer and gaming console hardware (and TVs/monitors) have become extremely powerful in recent years, and are now more than capable of “painting and displaying” a highly-detailed scene; far more capable than when this video game was first created.

The eyes are said to be “the windows to the soul,” and while certain cultures or individuals around the world may not place so much importance on the way they are shown in art, most (but not all) Japanese art does seem to show the eyes in expressive detail.

Now with gaming hardware as powerful as it is today, I’d be surprised if Ammy and the other characters in the Ultra-High-Definition sequel will still walk around with black dots or lines in place of their facial features.
I’m certain Ōkami’s sequel (and its merchandise) will be painted more finely than ever.

What’s your opinion, and how did you feel when you first saw black eyes on Ōkami’s characters? Feel free to leave your comment below: