Ōkami had plenty of humor, and so it also inspired artists to create funny fanart.

Today’s blog post shows wacky and humorous situations from Ammy’s adventures, and also some “what if” interpretations.

“What if Ammy were to lick the giant boulders of ice in the Moon Cave, instead of melting them with fire?”

Well… I suppose it would take a whole lot longer for Ammy to melt those ice boulders, and Issun would yell at her a lot.

Let’s relax a bit from all the hard work that life throws at us, and take note of the not-so-serious moments. 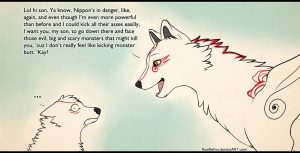 Click on a picture to see it pop up in a “lightbox”. All fanarts shown are my personal favourites. (Featured art: Amaterasu’s a Terrible Mother – by Senpai Tuba)

Hah! A drawing that’s right “up my alley”!
When I first heard about Ōkami’s supposed “sequel” (Ōkamiden) and that Ammy had apparently sent her little baby-puppy down to fight hordes of horrible demons, I was quite surprised. This drawing sums up my thoughts perfectly.

By the way, when reading Ammy’s words on the drawing, do you “hear” them with a British accent? 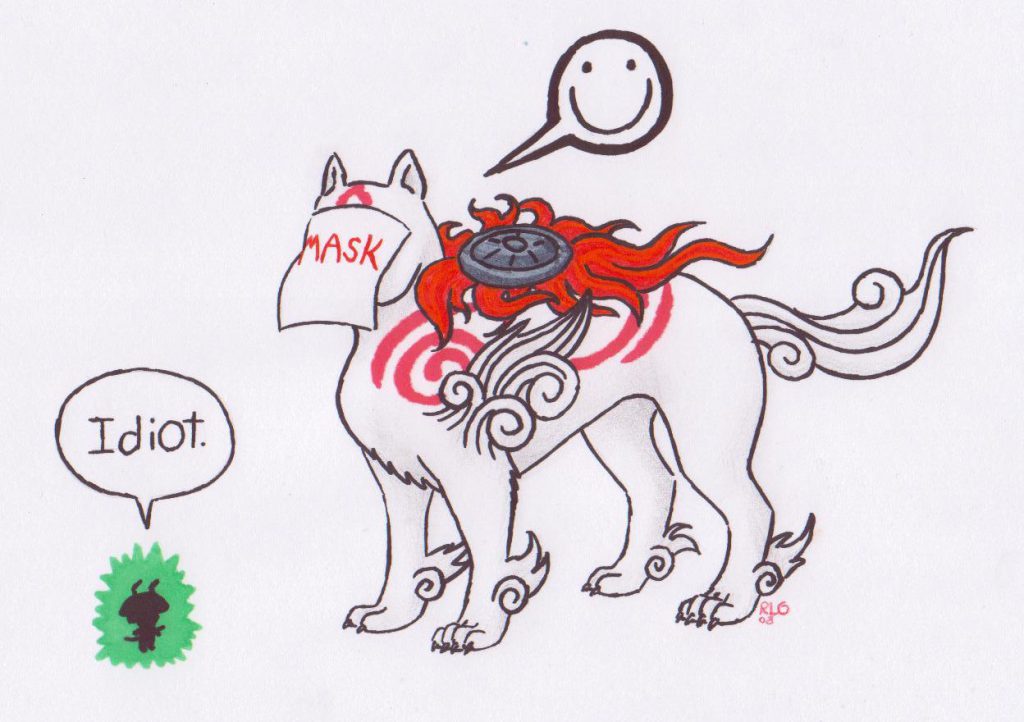 What’s the matter, Issun? It’s not like those imps (demonic enemies) are intelligent enough to know any different. Ammy has every reason to be proud and chipper!

In case you haven’t played the game, or reached the “Moon Cave” level yet: there is a scene where Ammy needs to disguise herself as an imp by wearing a mask like them, in order to mingle amongst Orochi’s many imp servants without being detected as an intruder.

This is a part of the game that many people had fun with – being able to draw on the mask to make their own design. Some people wrote naughty words, “not a wolf” or lots of other amusing things. Clearly imps aren’t too bright, because the disguise always worked.

Oh my, so this one might take some extra explaining: 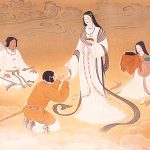 Apparently the artist kept getting pestered to “draw Amaterasu from Ōkami as a sexy human”, so he replied by drawing Amaterasu in her 4‑legged wolf form, pretending to be a sexy human supermodel.

That’s certainly a different way of saying no!

(…Did Ammy get those shiny fresh oranges from Kamiki Village?) Also – that’s quite a fetching sun-design on her bikini and throw blanket.

Just look at that proud and accomplished expression on her face.

Ammy the Turnip Goddess – by Unknown_Artist 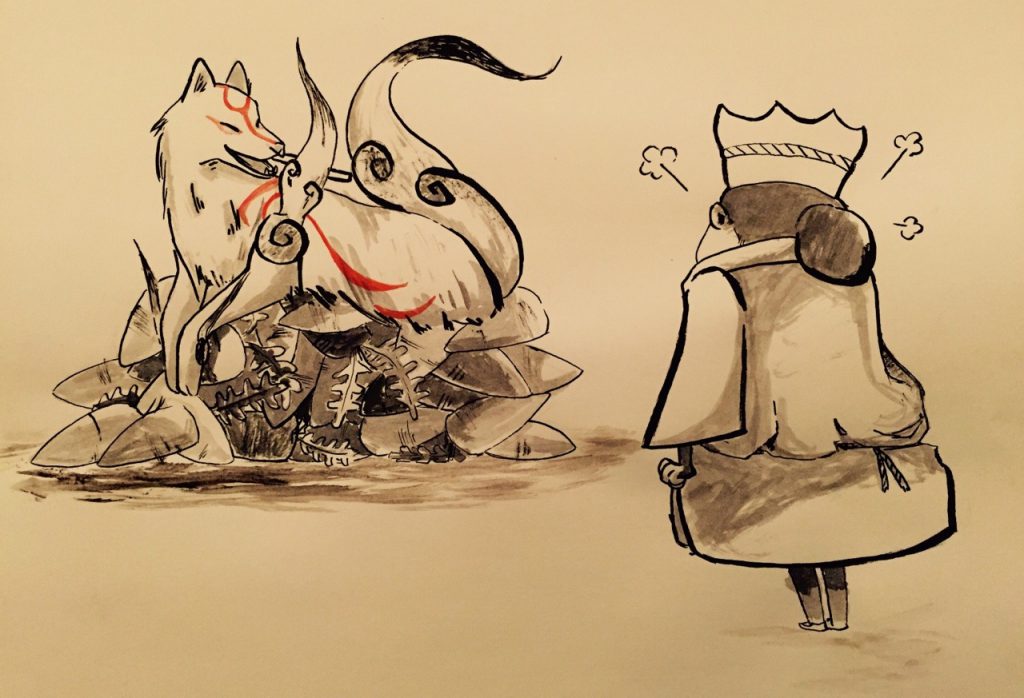 Hah, yet another proud and accomplished expression on Ammy’s face.

This time, Ammy’s showing off that she’s not only the goddess of the sun, but also the goddess of digging up turnips – much to the frustration of the turnip (everyday human) farmer/owner/guard: “Mushi’s mother”.
Ammy sure is multi-talented!

For those who haven’t played yet: you’d better brush up on your digging skills, because they’ll need to be pretty good to progress through the game, or you’ll get whacked over the head! 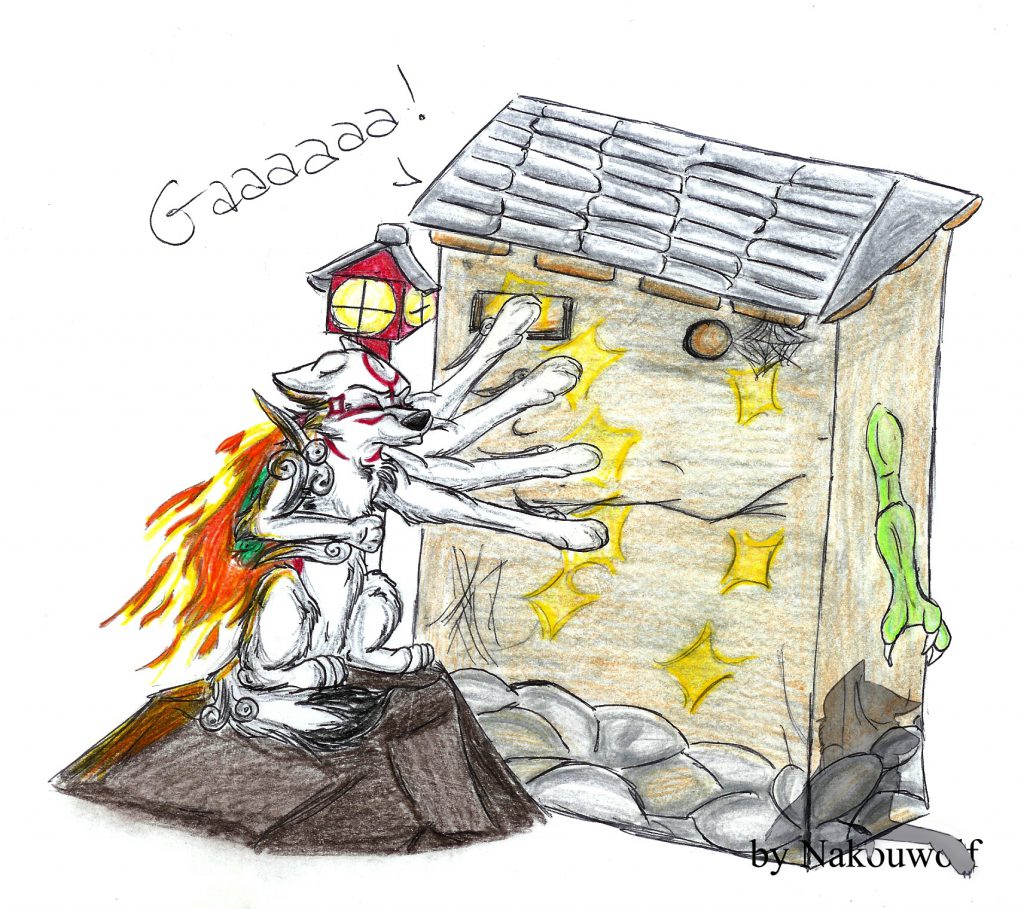 Poor Ammy, I can sympathise. It was extremely difficult to hit the weak spots on (demonic enemy) “Blockhead Grande” in the right order and place, to get past him.

It took me 136 hours to play through Ōkami, the first time I played it. Time well spent, in my opinion… except for the time I wasted trying to get through that damn Brickbrain, argh!
Allow me to to congratulate those of you, who hadn’t given up. I tend to block out traumatic memories, but do vaguely remember sticking paper to my screen in desperation and scribbling numbers onto the paper as his weak spots showed up. 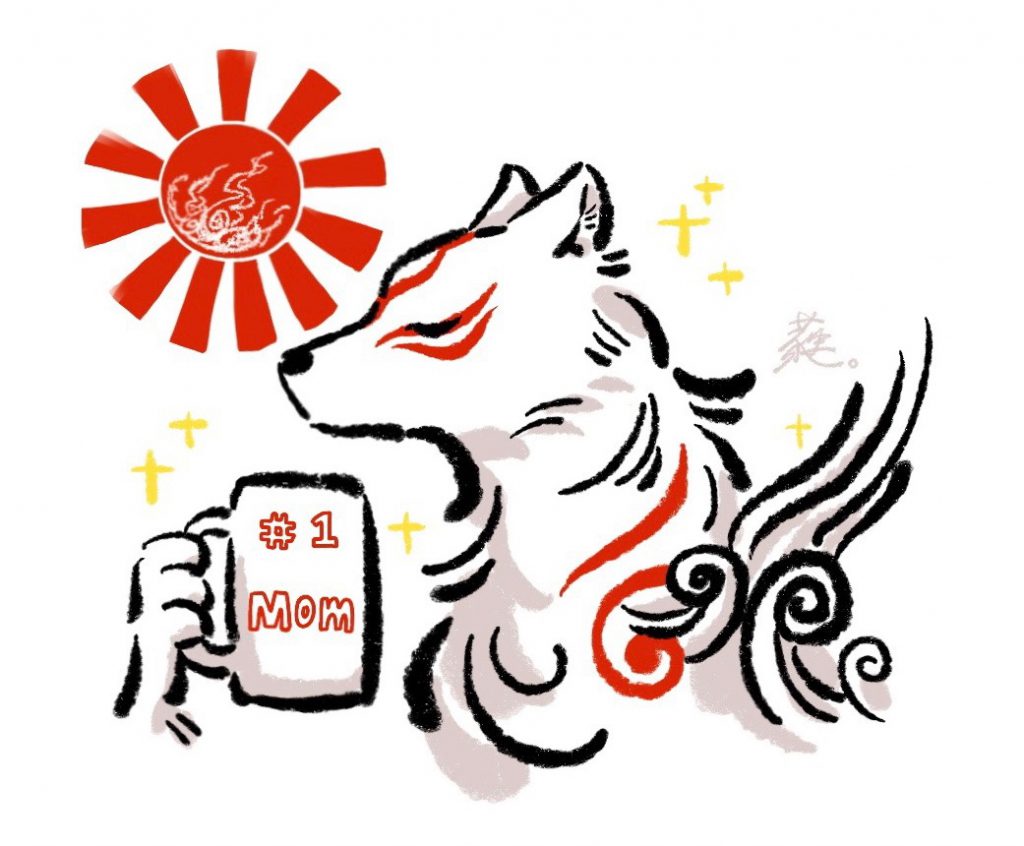 Anyone who’s played Ōkami knows this gag makes so much sense, hah! I like how Ammy’s holding her morning coffee, eyes closed and taking in the aroma, confident in knowing that she is indeed the number 1 mom!

In the video game, Ammy gets referred to as “Mother of us all” at least 14 times. With so much positive affirmation, she has more than earned the right to have that bold statement printed on her coffee mug without any sense of irony. (And then, if you believe Ōkamiden to be a true sequel, she went on to send her baby-puppy son to start drinking alcohol and get slaughtered by horrifying demons back on Earth. She should probably get a different mug now!)

Note to Self: Never Lick Ice Orbs – by WhiteKitten 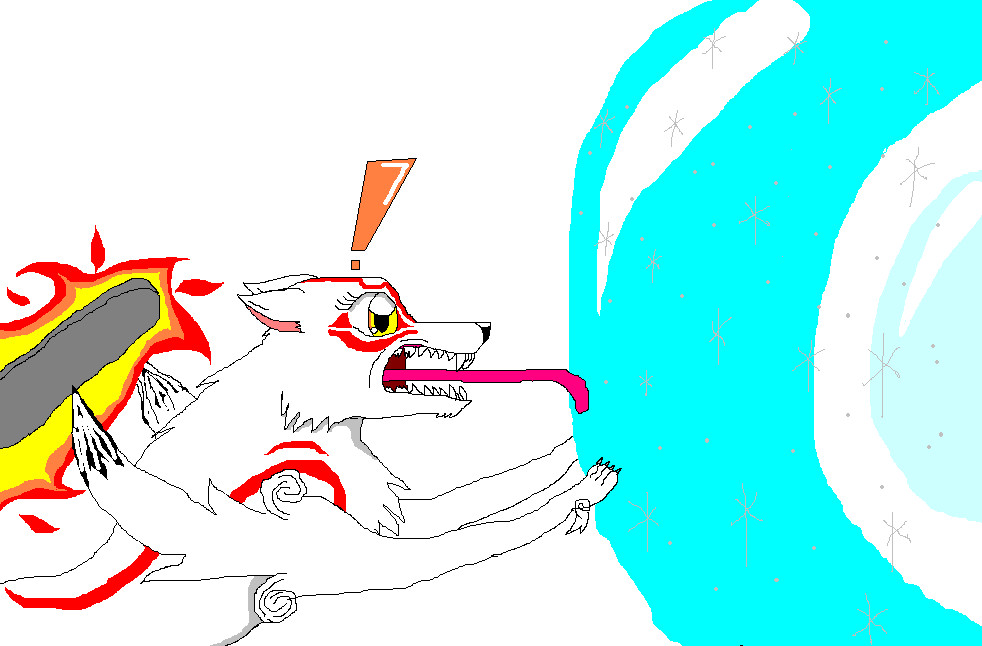 In the “Moon Cave” level of Ōkami, players were introduced to ice boulders acting as impassable walls and doors. Touching them would cause Ammy to get hurt, and she wasn’t able to power-slash through them with her godly powers. I suppose licking them would also cause issues, as seen in the drawing above.

To proceed through the level, one must first gain the Inferno brushstroke from the (brush) god of flames Moegami, so that those annoying boulders of ice can be melted away. (For some reason Ammy can power-slash through massive rock boulders though, hmm.

I have a confession; this was my least favourite level. All those unnecessary difficulties such as finding food ingredients in weird places, finding an imp’s mask in a treasure chest, rolling a massive rock through a tricky trail to light some fire spheres, and places being blocked off by neatly-placed ice boulders (which would also have blocked the imps that work at the Moon Cave), made this level a little bit too “improbable”.

Perhaps of course, it’s just a case of “sour grapes” in my case – it took me ages to figure out how to get to the bottom of the platform shaft (and that I even needed to go there).
Kind of rattled my normally high opinion of myself for a moment, once I realised it all, grr.

“Thanks Waka” (For Nothing) – by Kiwifie

Some clever guy once said that there is great complexity in the simplest of things. Don’t know who he was, but I thought of what he said when I came across this drawing!

This 3‑panel comic pretty much sums up (mysterious) Waka’s contribution up to the last moments of the game. My complaints could go on for several paragraphs, but in summary the guy is almost completely useless.

Yes, some people will disagree with me, I know he’s popular and liked by a lot of fans. Spoiler: Let’s not forget however, that (even though by accident) he’s the reason for Nippon’s misery in the first place, and also the destruction of the Celestial Plain.

I bet it’s his magnificent French accent, that inspired everyone to forgive his mistakes. Knowing him, the guy probably fakes his accent, and just pretends that it’s natural (probably colours his hair too)!
There’ll be a magnificent blog post on Waka in the near future. 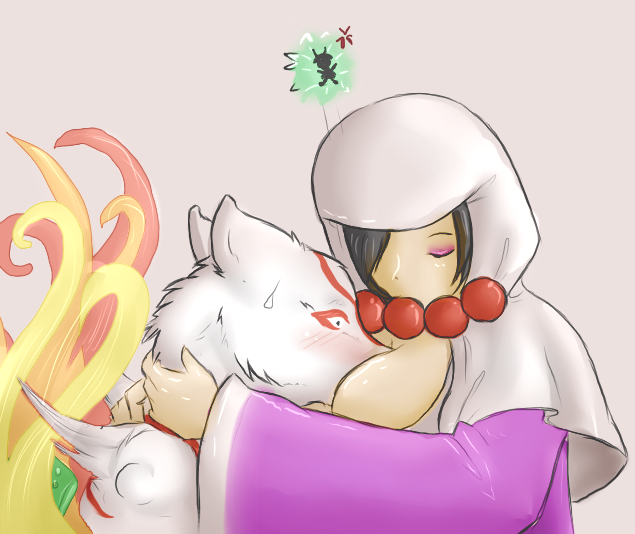 Speaking of natural… Rao being a very welcoming and friendly friend; I suspect Issun is quite jealous. Probably an amusing moment in the game, that was cut out of the final release!

By the way, did you know that the noses of wolves (and dogs) have evolved in a way that still allows breathing, even when pressed up tightly against something?
I don’t know why this tidbit of information came to me just now, but I thought I’d share it with you.

(That’s enough immature humor from me, I promise.)

On a Roll – by Frozen Fortune 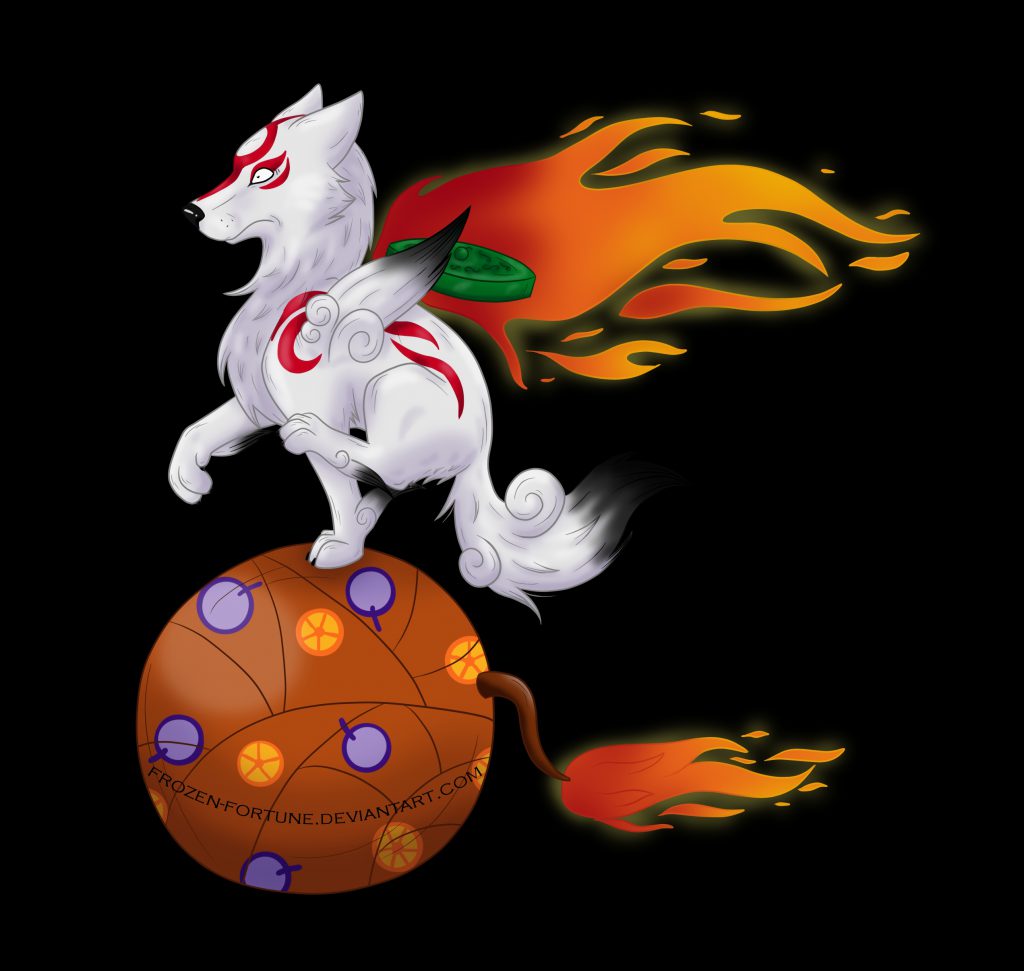 What if Ammy had had only just re-learned the “Cherry Bomb” brush technique, but she still didn’t know how to use “Galestorm” to blow the bomb towards her target by creating wind gusts? Well, I guess she could jump on the bomb and roll it… although headbutting might still be safer (as long as the bomb doesn’t go off).

For those who haven’t gotten to this part of the game yet: Ammy will be granted the power to create large (cherry) bombs by (brush god) Bakugami, the god of explosive force. This allows Ammy to blast holes in walls and also damage enemies.

…Ammy, just go and see (brush god) Kazegami already and get him to give you the power of Galestorm! Save the circus acts to Sleepy the Bear – you’ve seen him do this in his sleep, he’s clearly better than you at this! 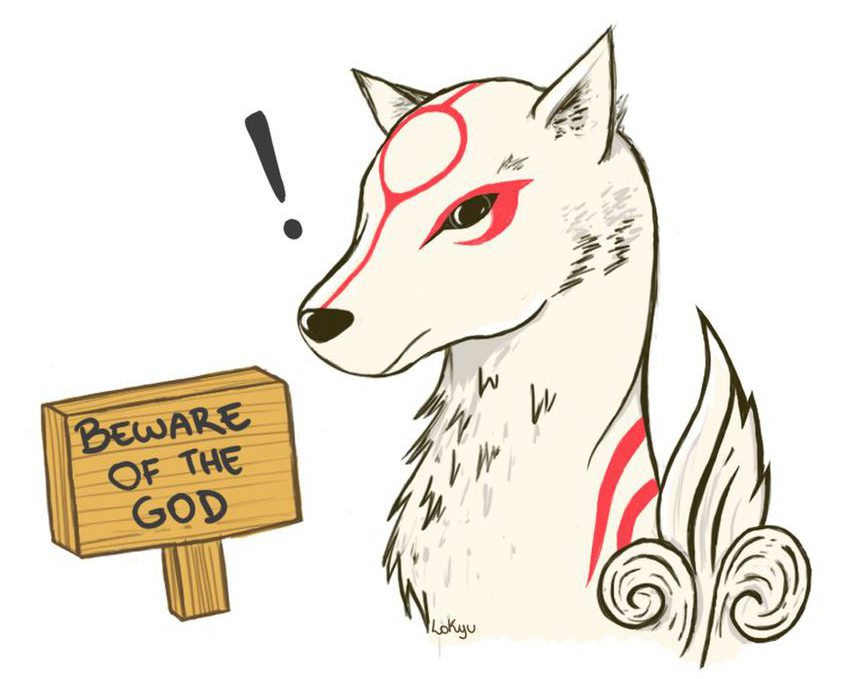 Heh, now that’s a different take on the traditional “beware of the dog” signs. I think (little bug) Issun is messing with Ammy here. Could this be revenge for slobbering on him all those times, or is such a sign actually a compliment?

My thinking is that Ammy is a god, and also incredibly powerful and dangerous towards demons – however god written backwards spells “dog” and Ammy’s a wolf – and wolves are generally considered more noble and majestic than dogs, so this could also be an insult.
If Ammy complains to Issun about being “reduced” to a fierce guard-dog, he’ll just tell her not to over-analyze the joke so much, and he’ll do it with a smirk on his face, that rascal. 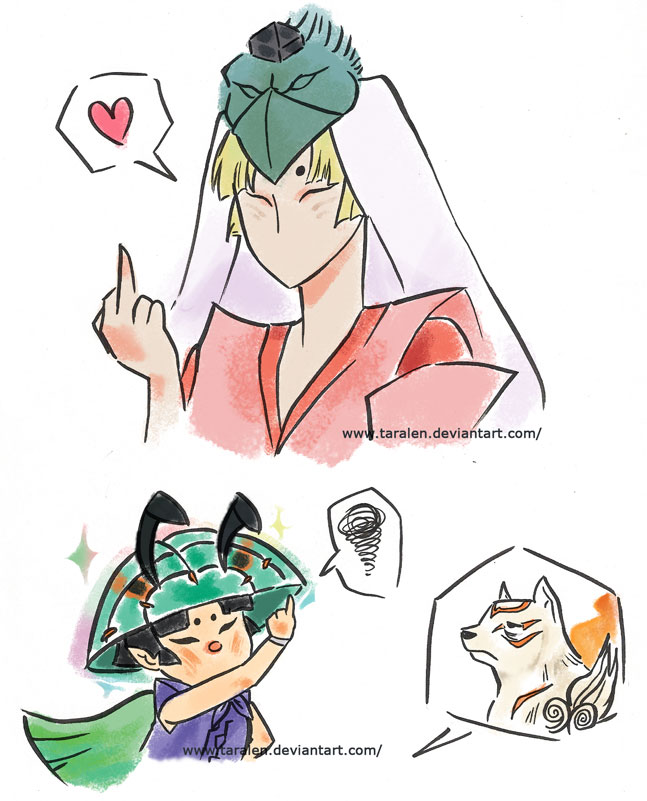 Two immature boys showing each other the middle-finger, except that Issun’s the one with the incredibly short temper and takes (mysterious) Waka’s provocation seriously. Poor Ammy’s just trying to demolish savage mountain-sized demons and then feed some random birds with heavy bags of seed she carries around, but has to put up with such silliness.
That’s life, I suppose – even for a mighty goddess. 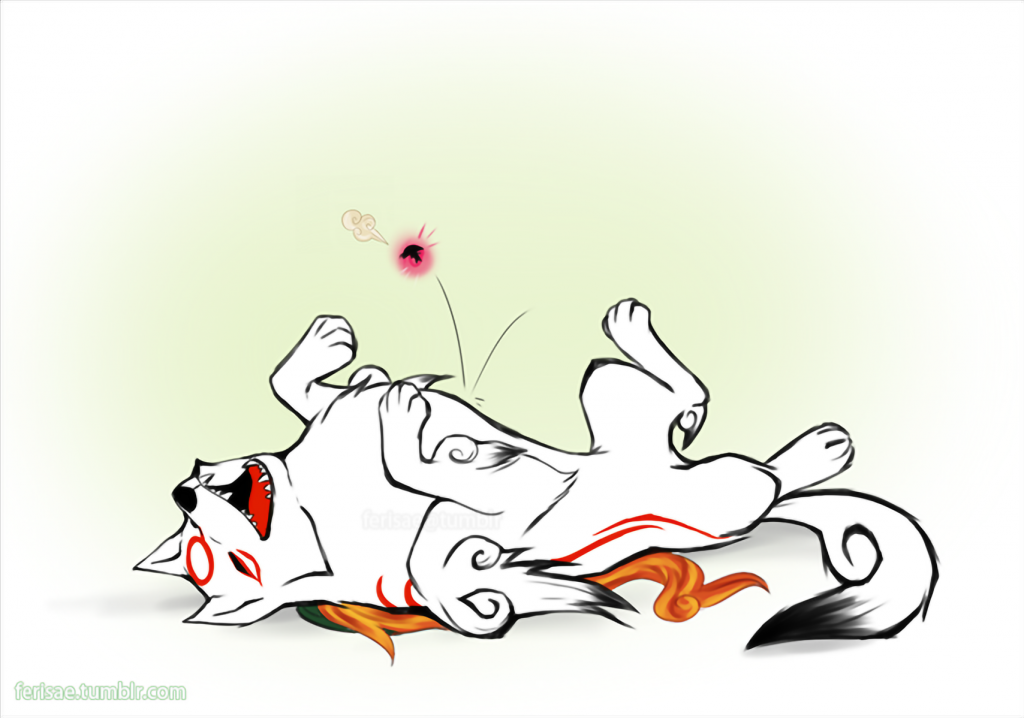 ← Reminds me a bit of my doggie. It makes sense that for insect-sized Issun to scratch Ammy’s belly, he’d probably have to jump/bounce on it.

If he actually scratched her with his hands, then it would probably feel more like a fat flea scurrying around in her fur.

Although, the guy sure bounces a lot even when just talking to people. Maybe it’s just what he does. I think that’s why Ammy’s so happy and Issun’s Angry – he’s always bouncing about on her head and she wanted a belly-scratch, so she just rolled over on her back.
She’s “abusing” his natural predisposition to bouncing, for her own belly-scratching amusement, haha.

Speaking of bouncing, I wonder what sports Issun and other Poncles like him would play… basketball would probably be out of the question, because everyone would be too good. Soccer wouldn’t work, because it’s not possible to reliably defend the ball from being stolen, when you’re bouncing all the time. Trampolining would be extremely boring, and not even a sport.
This is a mystery that we may never solve.

Well, that’s the end of this post for today, I hope you enjoyed these fanarts as well. There are plenty more funnies for me to post in future blog posts.
In the next blog post, we’ll be getting a bit more serious… Ammy dishing out some Divine Retribution and banishing the “Shiitake Mushrooms” out of vile demons.